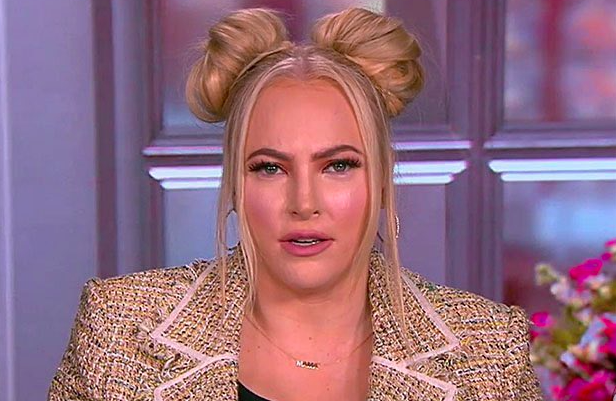 John McCain’s daughter, Meghan, is having a very bad week. And we’re not just talking about her hair extensions and blue eye shadow.

McCain drew criticism after she ordered President Joe Biden to fire Dr. Anthony Fauci on Monday’s episode of The View because he hasn’t personally called to inform her when she can expect her coronavirus vaccine.

“The fact that I, Meghan McCain, co-host of The View, don’t know when or how I will be able to get a vaccine because the rollout for my age range and my health is so nebulous, I have no idea when and how I can get it. If you call me at 3:00 in the morning, I will go any place at any time to get it,” she whined.

The View co-host Meghan McCain calls for Dr. Fauci to be replaced with someone who “maybe does understand science.” pic.twitter.com/9pIriLu2Uq

Since then, McCain has been the subject of widespread ridicule on Twitter. And things don’t seem to be letting up…

Propagandist Meghan McCain says Dr Fauci should be fired for doing his job.

I say Meghan should be fired simply for being her.

The hashtag is trending. I would think we could give it a boost.#FireMeghanMcCain

meghan mccain on the view: pic.twitter.com/zypuPRvRkZ

Meghan McCain wants to see the manager of COVID.

Sorry @MeghanMcCain, but scientists aren’t politicians. we get it, you’re tired of Covid and want a vaccine. We don’t hire and fire scientists based on public opinion or your pandemic exhaustion and what you’re calling for is irresponsible.

McCain hasn’t helped her case by digging in her heels further rather than, say, taking a moment to ask herself why people are denouncing her. She’s been snapping back at critics, doubling down on her argument and blasting those “sainting” Fauci.

He told me not to wear a mask and that masks don’t work when I was 3 months pregnant in the middle of Manhattan.

He then later admitted it was an intentional lie so we would donate masks to essential workers.

Wow, bringing my five month old daughter into this…

You all just turned into Trump and everything you all claimed to hate. You’re evil, just like him. https://t.co/o9mxTB6Y6Q

The messaging is incredibly inconsistent and confusing. I voiced my frustration honestly despite the fact that if you and twitter don’t like it, I represent the feelings of many Americans.

I also believe sainting our public figures to infallibility is dangerous and irrational. https://t.co/HEGCPmMKsB

She’s also been blocking people left and right on Twitter…

I’m so glad she got my message loud and clear.

She can stay mad. pic.twitter.com/fIneT4WhoD

I don’t mean to brag, buuuuuut, Meghan McCain blocked me

You were blocked by HER, Meghan McCain, co host of The View!

never been prouder to be blocked by meghan mccain.

I’m also blocked by Meghan McCain and I’d tell her that I’m a teacher married to a teacher and we STILL do not have vaccine appointments or any hope of getting one soon so SIT DOWN abt your vaccine & stop whining abt school.buildings reopening while teachers can’t get vaxed

I’ve never been prouder to be blocked by Meghan McCain.

Here’s a clip of McCain bemoaning cancel culture last summer on The View while discussing Tucker Carlson‘s lead writer, Blake Neff, who was fired for maintaining a secret social media account where he regularly spewed homophobic, racist, and misogynistic bigotry.

“I am against cancel culture,” McCain said, adding, “I think one of the reasons why I’m always a proponent of Tucker Carlson is because I believe in diversity of opinion.”