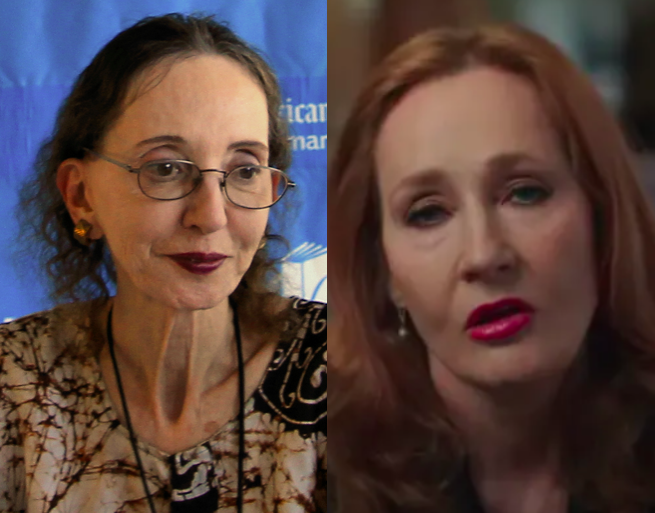 The 83-year-old is currently blocking people left and right on Twitter after she made inflammatory remarks attacking nonbinary people for absolutely no reason, saying “they/them” pronouns are confusing and language is supposed to be about seeking clarity and blah, blah, blah.

Yesterday, Oates tweeted: “”they” will not become a part of general usage, not for political reasons but because there would be no pronoun to distinguish between a singular subject (“they”) & a plural subject (“they”). language seeks to communicate w/ clarity, not to obfuscate; that is its purpose.

"they" will not become a part of general usage, not for political reasons but because there would be no pronoun to distinguish between a singular subject ("they") & a plural subject ("they"). language seeks to communicate w/ clarity, not to obfuscate; that is its purpose. https://t.co/uRhYJKP0LB

For the record: Oates is wrong here, both about the rules of the English language and in her sentiment about “they/them” pronouns. For a professional writer who also claims to be a liberal, she really should know better.

A backlash almost immediately ensued, and pretty soon, Oates found herself trending on Twitter for all the wrong reasons.

Here are just a few of the responses…

We’ve been using it for a very long time. It’s already in general usage.

Wait til you hear about “you.” It’ll blow your fucking mind.

“I had to call my doctor about my chronic inability to understand that the singular they has been in use in English since the 1300s.”

“what did she write again- oh” pic.twitter.com/boyhEbZ1m8

And yet there is “you”

I really hate to say it, but you are wrong on this one. Had a talk about this over dinner. I am trying to get better about this. It is hard after decades of using “he” or “she”. Don’t stay stuck in the past.

Talk about missing the plot.

How do you feel about the singular “we”? As in, “we are not amused!”

Roses are red
Violets are blue
Singular They
Pre-dates singular you https://t.co/QdcitWKS4m

Given that Chaucer was using singular ‘they’ in The Canterbury Tales, I feel like you’re around 600 years too late here. You’re also wrong.

Oates later tried to walk back the tweet several times, claiming she’s happy to use “they/them” pronouns when talking to non-binary people, and she was just trying to spark an “academic” discussion, and language evolves, and maybe this is all just generational, and blah, blah, blah.

Now, she could’ve left it at that and the whole thing probably would’ve blown over by this time tomorrow. But for whatever reason, she then decided to retweet someone defending her initial tweet, calling “they/them” pronouns “impracticable” and implying that nonbinary people are just seeking attention.

(& Twitter itself a small percent of the "real" world–as we often forget.) https://t.co/hVZS5RWIoR

Everyone else, have a good day. Love you.

JK Rowling: "The trans are coming for our kids and bathrooms!"

Joyce Carol Oates: "'They' will never be a person. He/She. That's all you get."

Anne Rice: "I'm going to make my main character's mom nonbinary and openly talk about how I question my own gender. Since the 80's."??

Joyce carol oates really woke up today like "I've got it! No one's heard what I have to say on THIS topic before!"

“I’m bored and I have 215,000 followers so let me shit on a marginalized group of people who are discriminated against everyday.”
— Joyce Carol Oates

Just Joyce Carol Oates on the "asshole about autistic people to asshole about pronouns" pipeline pic.twitter.com/06TzFBE8rK

Obviously I’m biased on the grounds that I use they/them pronouns and have never read her work, but Joyce Carol Oates seems like a real dumbass