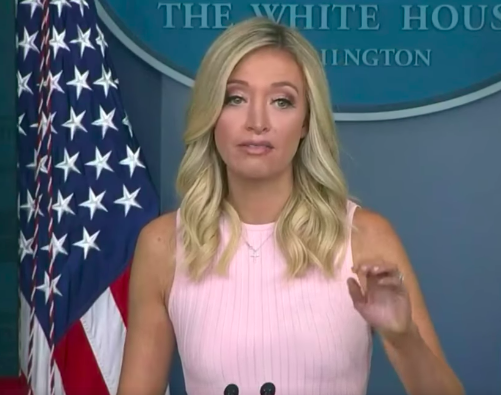 Since taking office three and a half years ago, Donald Trump has banned trans and HIV-positive people from serving in the military, opposed the Equality Act, voiced his support for LGBTQ workplace discrimination, rolled back existing LGBTQ non-discrimination protections, touted religious freedom laws, appointed antigay judges, erased any mention of LGBTQ people or their rights from government websites, refused to recognize LGBTQ people in the National AIDS Day Address, refused LGBTQ asylum seekers fleeing violence and prosecution, banned embassies across the world from flying pride flags, and the list goes on and on (and on).

But nobody is more “proud” of Donald’s achievements for LGBTQ Americans than White House Press Secretary Kayleigh McEnany.

During a press conference yesterday, McEnany was asked whether Trump might reconsider his stance on transgender troops after more than 100 House Democrats called on the military to end the ban.

“I haven’t talked to him about that specific policy,” McEnany responded, “but this president is proud that in 2019 we launched a global initiative to end the criminalization of homosexuality throughout the world.”

She continued, “He has a great record when it comes to the LGBT community. The Trump administration eased a ban on blood donations from gay and bisexual men and he launched a plan to end the AIDS epidemic by 2030, so we’re very proud of our achievements.”

When it was mentioned that 70 percent of Americans support both trans service members and the Supreme Court’s ruling in Bostock v. Clayton County, that declared discrimination against trans people in employment is illegal, McEnany replied: “I have no updates for you.”

Then she added, “But several of the events that you cited, like the Supreme Court ruling, I would refer you back to Justice Kavanaugh, who said, ‘We are judges, we’re not members of Congress. Instead of a hard earned victory won through the Democratic process, today’s victory is brought about by judicial dictates.’ So we’ll always stand on the side of correct statutory interpretation.”

?Blade reporter Chris Johnson pressed the White House if Trump would reconsider his ban on transgender people serving in the military. Press Secretary Kayleigh McEnany insisted that the president "has a great record when it comes to the LGBT community" ?