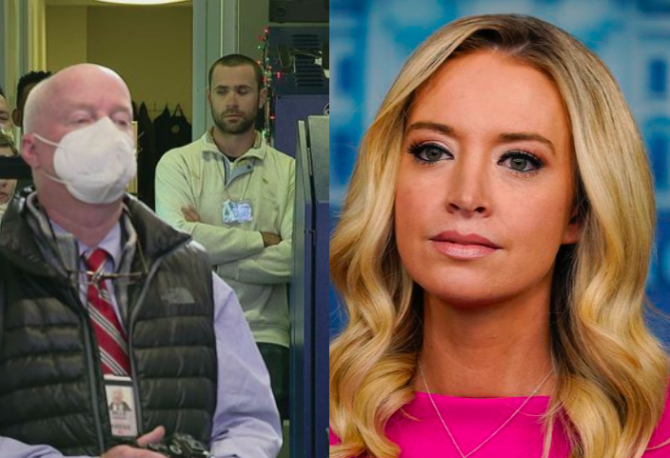 For whatever reason, Kayleigh McEnany’s husband popped into the White House briefing room yesterday while she was speaking to reporters. Because inviting your spouse to sit in on your work meetings is super professional!

Sean Gilmartin showed up to the 24-minute briefing without a mask then refused to put one on after someone reminded him that face coverings are required in all common areas of the White House.

According to LGBTQ reporter Chris Johnson from the Washington Blade, when Doug Mills, a photographer for the New York Times, noticed Gilmartin wasn’t following the rules, he “politely pointed out” the mask policy.

Mills says he didn’t know who Gilmartin, a professional baseball player, was when he noticed him standing in the back of the room, maskless, for the entire briefing.

After confronting him, an incredulous White House staffer butted in to inform Mills that he was speaking to none other than “Kayleigh’s husband.” When Mills “restated the mask rules and said it doesn’t matter who [Gilmartin] is,” the staffer and Gilmartin stormed out of the room in a huff.

According to Steven Portnoy of CBS News Radio, McEnany, who tested positive for coronavirus in October, was joined by her husband and six aides, one of whom is her husband’s cousin, during the briefing. None of them were wearing masks.

Because irony is dead, at the very top of her briefing, McEnany shared a video montage of Democratic leaders violating their own coronavirus restrictions, describing the footage as “images of Democrat hypocrisy playing on loop.”