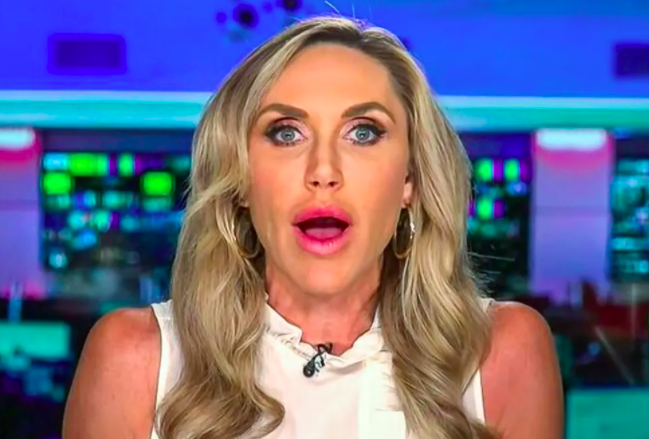 Lara Trump appeared on Fox & Friends yesterday to do what she does best: spew all sorts of racist and misogynistic microaggressions while railing against Kamala Harris.

When asked about Harris’ recent trip to Guatemala, Trump said all the Vice President knows how to do is “cackle” and that she only has her job because of “identity politics.”

“She needs to do something about our southern border,” Trump criticized. “She needs to answer questions. She can’t just laugh them off and cackle about it like she’s been doing.”

Oh, but she didn’t stop there.

Trump continued, “But don’t forget, she dropped out of the race, guys, for the Democrat [sic] primaries before her home state of California even voted. She probably thought, ‘I’m in over my head here.'”

“Now she is vice president of the United States, and I think we’re seeing the consequences of possibly choosing a person based on identity politics, based on their gender and not qualifications. This is what you get.”

For the record, Harris is more than qualified for her job.

A graduate of Howard University and the University of California, Hastings College of the Law, she’s been a prosecutor, a district attorney, an attorney general, and a U.S. senator. And, oh yeah, she helped Joe Biden win 80 million votes, more than any candidate in presidential history.

Trump made similar claims about Harris while speaking to Jeanine Pirro last weekend.

During the segment, which kicked off with Pirro criticizing Harris’ “stupid giggle,” Trump accused the Vice President of not taking the issue of immigration seriously enough.

“She thinks she can just laugh off the crisis at the border,” she said, “and it’s embarrassing.”

Then she ripped into Joe Biden for picking her as his running mate in the first place, saying that “all they do is virtue signal on the left and this is the problem when that is your M.O.”

Trump added that Harris didn’t have the “preparedness” for the job.

“Let’s get a woman who is actually qualified and up to the job,” she griped.

Here’s how folx on Twitter are responding to her microaggressions…

Every day all Fox does is promote hate and division.

The only thing these people do is be negative and talk about people like a dog 🐶.

Keep this in mind about Lara Trump, she chose to be a Trump.

Every single advertiser of Fox News entertainment who stands by Lara Trump ,we see you.

Talk about being unqualified; that would be Lara Trump.

Kamala Harris is VPOTUS was a lot of our pick for POTUS, Lara trumps claim to fame is being a trump😂

why is Lara qualified to speak to any of us, especially on a national level?

Lara Trump is a Terrorist

She is Eric Trump‘s wife for heaven’s sake. Who the fuck cares what she thinks about the VP?

Lara Trump isn’t up to the job of being a human being.