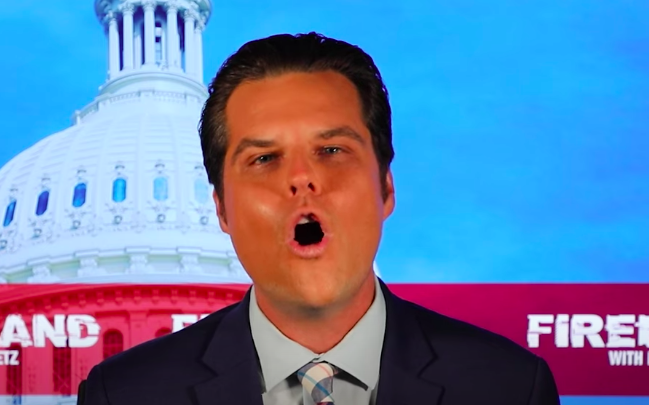 It’s hard to imagine Matt Gaetz is doing anything other than freaking out right now.

His former wingman, Joel Greenberg, just asked a federal judge to once again delay his sentencing so he can keep cooperating with the feds in their ongoing investigation into the antigay lawmaker.

Greenberg pleaded guilty to federal crimes including sex trafficking of a minor, identity theft, wire fraud, and conspiracy back in May. As part of his plea deal, he agreed to provide “substantial assistance” to investigators in their case against Gaetz.

Currently, his sentencing is scheduled for November 18, after a judge granted a previous request to postpone it to August 19. Now, his attorney is asking to push the sentencing back another five months to March 2022.

BREAKING: Matt Gaetz buddy Joel Greenberg asks for 5 more months before sentencing, with govt consent. This means the Feds are still VERY much going after the bigger fish — including Gaetz. Far from stalling, the case has gotten much larger.

In August, Greenberg handed over thousands of photos and videos, as well as years of Venmo and Cash App receipts and Google Voice text messages to prosecutors.

In his latest motion to delay sentencing, Greenberg’s lawyer argued that his client has been “cooperating with the Government and has participated in a series of proffers.” He also said his client intends to continue participating in the investigation and that his cooperation could impact his eventual sentence.

“Because Mr. Greenberg’s ongoing cooperation involves sensitive matters concerning ongoing investigations, he requests that the parties be allowed to provide additional information regarding Mr. Greenberg’s cooperation to the Court under seal, if deemed necessary,” the motion read.

Matt Gaetz (Q-Florida) is in some very hot water, and yesterday’s news shows that prosecutors believe his co-conspirator, Joel Greenberg.

Watch as I break down why prosecutors are moving closer to an indictment of Gaetz. pic.twitter.com/pzUViv0xCb

Sooooo what’s does all this mean for Gaetz?

That’s not entirely clear yet, but it’s definitely not good. In fact, it’s probably very bad seeing as how Greenberg was his right hand man for years, and arranged many of his alleged drug-fueled sex romps with prostitutes.

Federal investigators are still examining whether Gaetz broke federal sex trafficking, prostitution, and public corruption laws and whether he had sex with a minor, according to sources familiar with the case. They are also looking at whether Gaetz or his associates engaged in obstruction of justice, sources say…

Greenberg, a central figure in the ongoing investigation into Gaetz, has been providing investigators with information since last year, including information about encounters he and the Florida Republican had with women who were given cash or gifts in exchange for sex, a source familiar with the case confirms to CNN.

Gaetz has denied all of the allegations against him and has not yet been charged with any crimes.