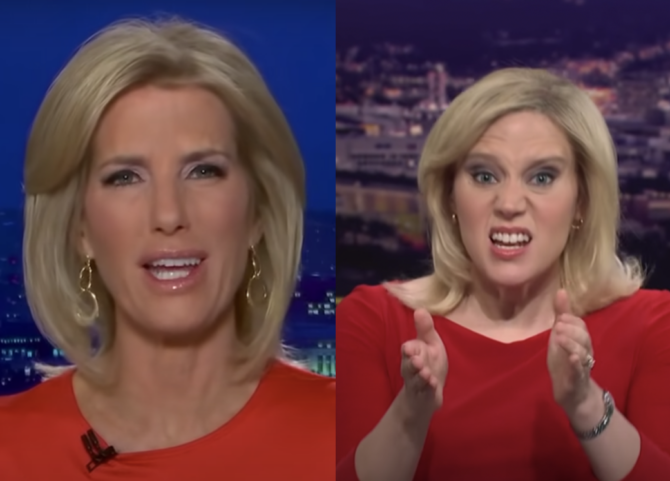 Talk about a meta fail.

Laura Ingraham took a moment out of her Monday evening show to try her hand at improv comedy. To the surprise of, frankly, no one, it didn’t go well.

Ingraham attempted to mimic SNL funny woman Kate McKinnon, who had a show-stopping moment on last weekend’s edition of the comedy stalwart when she mimicked the homophobic Fox News host.

Ingraham tried to return in kind, performing an awkward monologue attempting to impersonate McKinnon impersonating her.

“Now there is a reason I like Kate McKinnon,” Ingraham slurred, head lolling about like a water balloon on a stick. “I have so much respect for her as talent.”

“She is so even-handed in the political commentary, but seriously, think of all the low-hanging fruit provided by Joe Biden and Nancy Pelosi. Little Petey B and the squad on a near-daily basis. I think this is kind of comedy gold, don’t you?”

Ingraham closed her cringeworthy attempt at humor by offering to appear on SNL and play herself, or, better yet, House Speaker Nancy Pelosi.

“I’m a member of SAG but I will do it for free,” Ingraham joked.

Ingraham may have thought she nailed McKinnon, but viewers felt otherwise. Here’s what people are saying about her ill-fated attempt at satire…

@IngrahamAngle That SNL thing really got to you, didn’t it, Sunshine? ?

Laura Ingraham is so butt hurt by SNL that she's goes on TV to do a schoolyard imitation of the person making fun of her.

So when you think about it, Kate McKinnon actually tricked Ingraham into doing the most accurate impression of Ingraham ever.

Kate McKinnon is a genius.
Laura Ingraham is a dumbass.

Kate McKinnon is a hero.
Laura Ingraham is a villain.

The best part about this is that Kate McKinnon absolutely hit the mark and Laura Ingraham isn’t doing herself any favors by calling attention to it.#FauxNews https://t.co/ctPSRfKu6Z

Ah, Laura's ratings so low she thinks a Kate impression will help her. I won't watch FOX but I WILL watch SNL, especially for these hilarious impressions!

Check out McKinnon’s performance below.