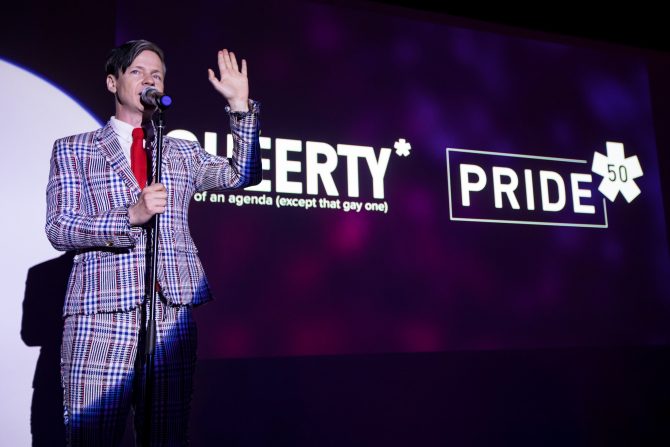 Well this is some casting news we can definitely get behind.

The last we heard about a Tiger King limited series, it was being developed by CBS with Nicolas Cage attached to play “Tiger King” Joe Exotic and Kate McKinnon cast as fellow tiger enthusiast Carol Baskin.

Apparently that show is still in production having moved over to Amazon, and another scripted show will be produced by Universal. Kate McKinnon is now attached to the Universal show, and will star opposite Hedwig and the Angry Inch creator/star John Cameron Mitchell.

Mitchell, who also appears on The Good Fight playing “Milo Yiannopoulos clone” Felix Staples and on Shrill as testy editor Gabe, has a proven record playing less-than-perfect gays. We can’t wait to see how he approaches Exotic, who rose to fame after the Netflix documentary Tiger King aired at the beginning of the pandemic and glued us all to our screens.

Related: In ‘Anthem,’ John Cameron Mitchell creates rock odyssey into the soul. His own.

“I’m thrilled to take on the role of this modern folk antihero,” Mitchell told Deadline. “Joe and I are the same age and like him, I grew up queer in Texas, Oklahoma and Kansas so I feel like I know a little bit about this guy and his desperate attempt to conquer an inhospitable world.”

We even remembering him telling the crowd at the Queerty 2020 Pride50 event that “the world is ready for more gay villains,” which you can interpret however you wish.

The Netflix series Tiger King details the life of the would-be musician, politician and reality show star with a private zoo in rural Oklahoma. Exotic’s life went off the rails after a longtime feud with Baskin and a series of tragedies in his personal life, including the death of his husband, Travis Maldonato.

He is now in prison after being convicted of attempted murder when he hired a hitman to kill Baskin. He maintains his innocence and tried very hard to receive a pardon from Donald Tump before he left office.

Mitchell’s credits also include the musical podcast Anthem: Homunculus, which he wrote and stars in alongside Glenn Close, Cynthia Erivo, Patti LuPone and Nakhane, among others. He’s directed films like How to Talk to Girls At Parties and Rabbit Hole, and wrote and directed Shortbus.

The show will air across NBC platforms, which include NBC, USA Network and Peacock. No release date has been set.