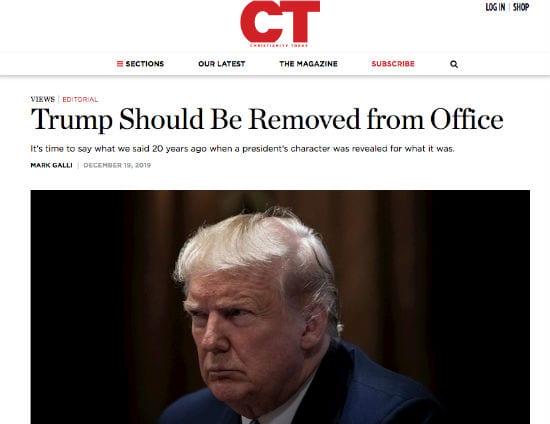 We never thought we’d agree with Christianity Today, but…

The magazine’s editor-in-chief Mark Galli just published a forceful editorial calling for Donald Trump to be removed from office. Not only that, but he’s urging his fellow Christians to stop sticking up for the guy, damn it!

“The facts in this instance are unambiguous,” Galli writes. “The president of the United States attempted to use his political power to coerce a foreign leader to harass and discredit one of the president’s political opponents.”

The magazine, which was originally founded in 1956 by none other than Billy Graham, is one of the leading evangelical magazines in the country, with over 250,000 print subscribers, plus a large online readership.

In the op-ed, Galli calls Trump’s actions not only a violation of the Constitution but “profoundly immoral” and says Trump himself is “a near perfect example of a human being who is morally lost and confused.”

The reason many are not shocked about this is that this president has dumbed down the idea of morality in his administration. He has hired and fired a number of people who are now convicted criminals. He himself has admitted to immoral actions in business and his relationship with women, about which he remains proud. His Twitter feed alone—with its habitual string of mischaracterizations, lies, and slanders—is a near perfect example of a human being who is morally lost and confused.

And then comes the real kicker: “To the many evangelicals who continue to support Mr. Trump in spite of his blackened moral record, we might say this: Remember who you are and whom you serve.”

Naturally, Trump isn’t pleased about the letter. In typical fashion, he took to Twitter to attack the magazine, calling it a “far left magazine” that “knows nothing about reading a perfect transcript of a routine phone call” and is “doing poorly.”

….have a Radical Left nonbeliever, who wants to take your religion & your guns, than Donald Trump as your President. No President has done more for the Evangelical community, and it’s not even close. You’ll not get anything from those Dems on stage. I won’t be reading ET again!

Related: Trump just became the third president in U.S. history to be impeached. Now, the memes…