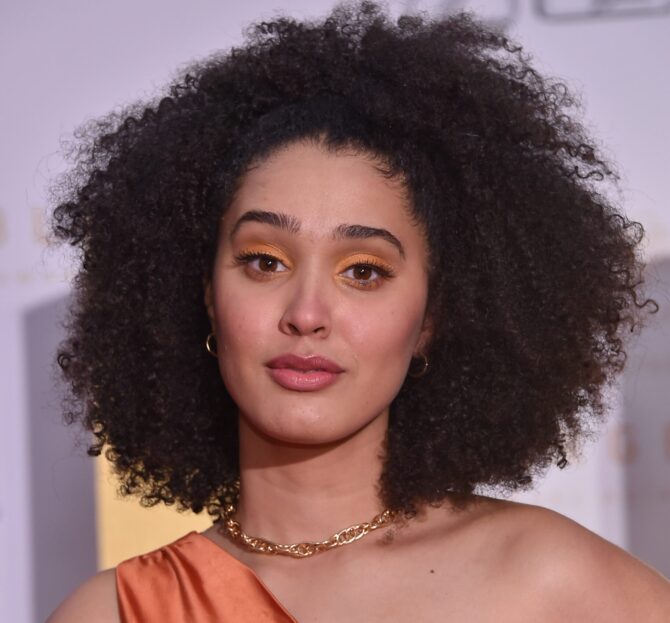 Shooting to fame during the first year of the pandemic isn’t ideal, and it certainly isn’t easy. Yet when Lee Rodriguez, the queer actress who immortalized the role of Fabiola on Netflix’s Never Have I Ever, rose to prominence after the show’s first season hit in 2020, she found herself unprepared for the windfall of probing questions that were directed her way. Typically, they were all about one thing: her sexuality.

In Mindy Kaling’s coming-of-age comedy, high schooler Devi (a brilliant Maitreyi Ramakrishnan) has to come to terms with the loss of her father and the loss of her ability to walk all in one swift blow. After recovering her trauma and regaining the use of her legs, Devi starts discovering that there’s more to life than getting straight A’s. That “more” is Paxton Hall-Yoshida, Devi’s longtime crush who’s just starting to take an interest in her at the start of season one.

But there was no way Devi was going to get through high school alone: with the help of her best friends Eleanor Wong (Ramona Young) and Fabiola Torres (Rodriguez) Devi finds a way to live life as a somewhat-normal high school kid dealing with an anything-but-normal home life.

Viewers instantly became obsessed with the heartwarming, heartbreaking show, and Fabiola was always a big reason why. As the captain of the school robotics team who creates a robot named Gears, Fabiola is going through her own identity struggles when we meet her. Gears is the first “person” she comes out to after she programs him to say the phrase “I’m gay.” It’s this moment that makes things possible for Fabiola. But her story isn’t just about coming out. “I thought it would get easier,” she laments in season two, after getting struggling to find out what kind of queer woman she wants to be.

Lee Rodriguez’s sensitive, open-hearted portrayal of Fabiola as a young questioning queer had every reporter asking the actress about her own sexuality. “The questions really started after Never Have I Ever came out,” Rodriguez wrote in a 2021 op-ed for Cosmopolitan. “People would ask, ‘So are you gay in real life? Or is it just for the show?’ Or like, ‘Oh, are you actually lesbian? What are you?’ I was like, ‘Oh, wow, I don’t know! I don’t know what label I am.’”

Rodriguez spent a long time questioning who she was. Like Fabiola, she had a hard time figuring out how she “fit in” to the queer community as large.

“I knew it was going to be a thing when taking on the role of Fabiola,” Rodriguez explained in the same article regarding the questions about her sexuality. “I was prepared for that because it’s not okay for straight actors to take queer roles. I personally would not have taken the role if I wasn’t. But what I didn’t know was how much I would get the question.”

But the questions continued, and Rodriguez found it difficult to get around them.
“When people kept asking me, I felt like maybe I didn’t look like a queer person. But you shouldn’t have to explain your queerness. You don’t owe anyone an explanation for your queerness or proof that you’re a valid queer person.”

This is Fabiola’s struggle, too. As one of the most relatable aspects of a show full of wonderfully real teen characters, she shows viewers a different way to be queer. “I’m not cool,” she tells her first girlfriend, Eve, at prom, after the two have been crowned homecoming queens. “I don’t know anything about pop culture and I don’t know how to use hip phrases like ‘what’s the tea.’”

It’s because Fabiola isn’t “cool” that she’s so relatable. It’s because she assumes King Princess is a “play” that we can’t help but fall in love with her authenticity.

Because that’s the thing we don’t get told as often, especially as teens: there’s no wrong way to be gay. “ I would love to see different ways to come out, because it doesn’t have to look a certain way,” Rodriguez told Cosmopolitan in 2021. That said, her own way of coming out—via Instagram, on National Coming Out day 2020—was pretty damn iconic.

“I am a proud queer woman!” Rodriguez announced in the caption. “It‘s so heartwarming when I hear that Fabiola has inspired some of you in the LGBTQ+ community to come out! It‘s the best feeling!”

It’s an even better feeling to see Rodriguez come into her own: as a person, as an actor, and as an ever-gayer and ever more incredible icon for queer teens who are finally seeing a version of themselves manifested onscreen.