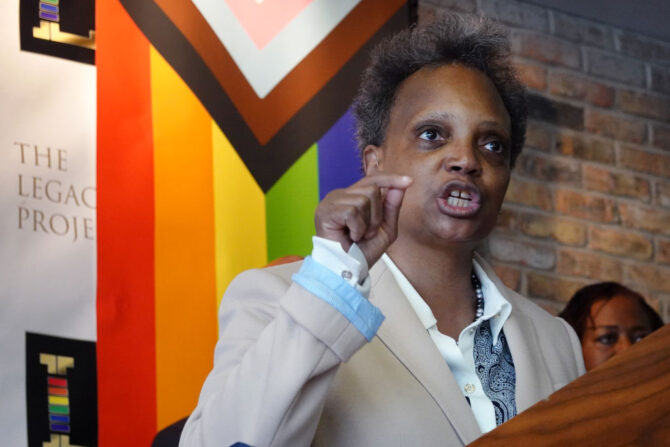 Chicago mayor Lori Lightfoot may not be everybody’s cup of tea, and she’s just fine with that. She said so (again) on Twitter this morning after some people took offense to her unfiltered remarks about Clarence Thomas last weekend.

Quick recap: On Sunday, Lightfoot marched in her city’s Pride parade and gave an impassioned speech about the Supreme Court overturning Roe v. Wade and Thomas threatening to go after federal protections for contraception, same-sex relationships, and same-sex marriage next.

“We will not live in a world, not in my city, where our rights are taken from us or rolled back,” Lightfoot said, before declaring, “F*ck Clarence Thomas!”

Fox News immediately pounced, wheeling out pro-Trump civil rights attorney Leo Terrell to blast Lightfoot for creating a “distraction” from the problems in her city and sending a “coded message” that threatened Thomas’ safety.

“This is very, very upsetting,” said Terrell. “The profanity she used at Clarence Thomas justifies why the Supreme Court justices need protection 24/7. You know what she did? She sent a coded message by using the F-word.”

We’d argue that Thomas created a bigger threat to his own safety when he voted to expand gun rights last week by overturning a New York law that restricted people’s ability to carry concealed firearms in public. But we digress.

This morning, Lightfoot let it be known on Twitter that she couldn’t care less if Terrell and others were offended by her choice of words over the weekend, tweeting: “If my language bothers you more than the destruction of our civil rights, then we don’t need to know anything else about you.”

If my language bothers you more than the destruction of our civil rights, then we don’t need to know anything else about you. https://t.co/ThXb9NI2xU

In an exclusive interview with Queerty last week, attorney Roberta Kaplan, who represented Edie Windsor in United States v. Windsor and successfully convinced the Supreme Court to strike down the Defense of Marriage Act in 2013, urged LGBTQ people and allies to stay focused.

“I obviously understand fear and depression, but I would urge people to overcome that,” she said. “One thing I can say that could help to buck people up is the fact that LGBTQ rights in our country evolved and developed at a faster pace than any other minority group in recent history.”

She added, “The number-one thing that LGBTQ Americans have to do is to vote and to make sure that every single person who knows and loves them votes for candidates who believe in our Constitution, who believe in equal protection, and who believe in the equal dignity of all Americans, regardless of who they love, the color of their skin, or who they marry.”