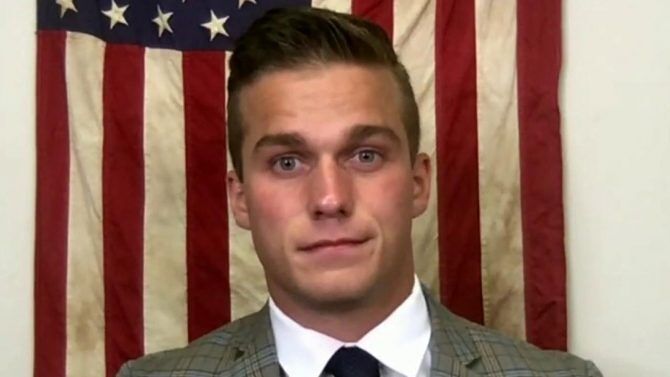 Madison Cawthorn took a break from bashing Rachel Maddow this week (more on that in a moment) to say something really stupid about voting rights on Twitter.

There’s been a lot of talk about the issue lately, with President Biden giving two major speeches about it this week and the Senate set to debate both the Freedom to Vote Act and the John Lewis Voting Rights Advancement Act sometime next week.

Related: Ex-LGBTQ ally Tulsi Gabbard is having a meltdown over voting rights, which she apparently opposes

But Cawthorn, bless his heart, doesn’t seem to get what all the fuss is about. Especially when the issue of vaccine passports seems to be dividing the nation.

“Please don’t tell me asking for a photo ID to vote in elections is racist while simultaneously supporting vaccine passports just to eat inside a restaurant,” the 26-year-old Nazi enthusiast tweeted.

Please don't tell me asking for a photo ID to vote in elections is racist while simultaneously supporting vaccine passports just to eat inside a restaurant.

OK, first, voter ID laws are a vestige of the Jim Crow era that Republicans continue to use to disenfranchise low income and minority voters who might otherwise vote for Democrats.

Second, vaccine passports are easily obtainable documents that anyone can get by simply walking into their local Walgreens and asking the pharmacist for a free COVID shot.

(BTW, if you need help finding where to get a COVID-19 vaccine near you, click HERE.)

And, third, this is a false equivalency. Voting in an election is not the same thing as eating at a restaurant.

People were quick to point out the many glaring fallacies in Cawthorn’s argument. Here’s what they’re saying…

Vaccine passports don’t disenfranchise large groups of people from participating in our democracy.

If you had gone to college you might know that vaccines are required to attend.

Anyone can get a vaccine passport, because anyone can get the vaccine. Not everyone is able to have a photo i.d. In most cases (if not all) you need proof of address in order to get a state i.d. That doesn’t make it very easy for the homeless people to obtain a photo i.d.

That depends on what photo ids are allowed by the government. Restricting ids that mostly poor and minority people usually have is racist.

Photo ID is not free and not convenient. Vaccine passport can be issued at any CVS, Walgreens, Grocery Store, etc. But you knew that already, you just don’t care.

The fact that you think these two things are the same explains why you flunked out of college.

Different issues Maddy, voting and eating may be the same thing to you. Voting is a right, dining out isn’t.

Let’s compromise Sparky. A person can only vote if they show their vaccination record.

Earlier this week, a leaked email showed a producer on The Rachel Maddow Show saying they didn’t want to ask Cawthorn for comment on a recent effort to invalidate his future candidacy for office because they didn’t want to “risk” him asking to appear on the show.

“We don’t have a relationship with his office and between you and me are a little worried that if we did inquire he might ask to come on and explain,” the producer reportedly wrote. “I know that is HIGHLY doubtful, but don’t want to take that risk.”

Related: Rep. Madison Cawthorn and wife to divorce after eight months of marriage

This is probably due to the fact that Maddow is a journalist who likes to report on the truth, and Cawthorn is a political hack who likes to spew hate and misinformation. So it makes perfect sense to us why they wouldn’t want him on the show.

Still, Cawthorn has spent all week bashing Maddow for being “afraid” of him.

Progressives are too scared to debate America First conservatives like me.

That's why @maddow was afraid to have me on as a guest on her show on MSDNC.

Honestly, we’d love to see Maddow go head-to-head with Cawthorn on some of his policy ideas. Maybe she should extend an invitation just to see what happens?