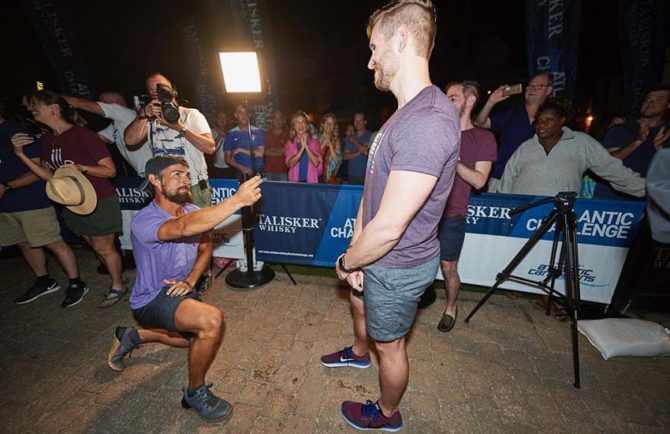 Forget walking 500 miles. A rower literally just crossed 3,000 miles over the Atlantic Ocean to propose to his boyfriend.

31-year-old David Alviar, along with fellow rowers Mike Matson and Brian Krauskopf, started their journey last December in the Canary Islands, off the coast of North Africa. Their final destination: the island of Antigua in the Caribbean.

Throughout the 3,000-mile, seven-week journey, the guys, who are all from Texas, kept people updated with humor tweets from their shared Twitter page @americanoarsmen:

we've left all traces of land behind to join the valleys of rolling waves. onward!

a small purple fish with a BIG dorsal fin just jumped in the boat. despite briefly considering eating it, we took pity and threw it back in

On the final day of their record-breaking journey, with just 39 nautical miles left to go, Naviar tweeted: “One last push!”

Twelve hours later, they reached land, where their friends and family eagerly awaited.

Smiling in front of the cameras, Naviar immediately approached his boyfriend, Stanley, got down on bended knee, and held up a ring.

“Will you marry me?” he asked.

A teary-eyed Stanley nodded “yes.” The guys kissed. And the crowd went wild.

Congrats to the happy couple, and to the whole crew!