An anonymous man in Nashville, Tennessee, has filed and been granted a restraining order against President of Fisk University Dr. Kevin Rome, Sr. The reason: the man in question alleges that Rome drugged and robbed him after meeting on Grindr.

According to the complaint, obtained by the website Scoop Nashville, the victim in question met Rome using the alias “Rob” on Grindr in mid-May. The two initially met for sex earlier that month. About a week later, Rome appeared unannounced at the victim’s apartment, where Rome then drugged him with GHB. With the victim incapacitated, Rome then invited other men to the apartment to have sex with him in his drugged state. 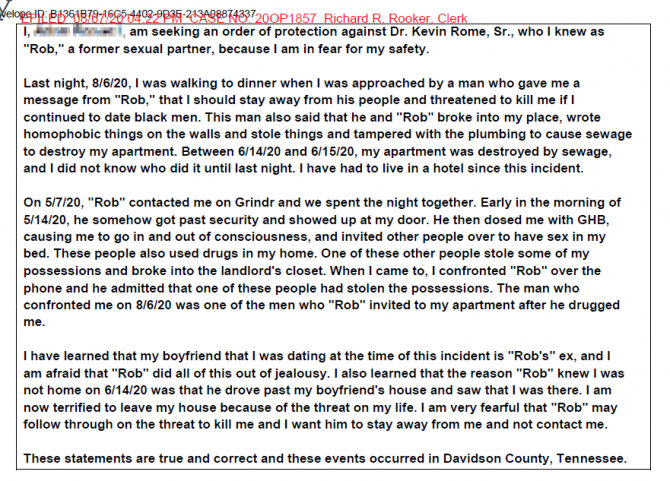 The victim also alleges that in June Rome and an accomplice burglarized his apartment, stealing some of the victim’s personal possessions as well as breaking into a closet that belonged to his landlord. The complaint further charges that Rome vandalized the victim’s apartment with homophobic graffiti and damaged the apartment’s plumbing system.

Events took an even more ominous turn on August 6 when the victim received messages from one of Rome’s accomplices warning him not to date “black men” any longer. The victim speculates that jealousy may have motivated the assault.

“I have learned that my boyfriend that I was dating at the time of this incident is “Rob’s” ex, and I was afraid that “Rob” did all of this out of jealousy,” the victim writes. “I am now terrified to leave my house because of the threat on my life. I am very fearful that “Rob” may follow through on the threat to kill me and I want him to stay away from me and not contact me.”

A Nashville magistrate granted the restraining order against Rome based on the victim’s complaint. Rome, for his part, denies the allegations telling Scoop Nashville “I’m just as shocked as you, I have no idea who this person is and I can’t even respond to it because I don’t even know who they are.”