Chris and Matt had been together for eight years when they decided to it was time spice things up. So they did what any monogamous gay couple does… they invited a woman named Cait into their bedroom. Now, they’re a bisexual thruple and, they say, they couldn’t be happier!

“Before I met Matthew I had dated quite a few girls and quite a few guys,” Chris tells Metro. “The three of us started to spend more and more time together and after about seven or eight months she was staying over five nights a week.”

Related: Am I good enough for my two boyfriends, who happen to be husbands?

It took a bit of time getting used to things, especially when it came to sleeping arrangements.

“Matthew and I used to sleep on opposite sides and then Cait came long,” Chris explains. “If I wanted to stay on the same side Cait would have to be in the middle and we found quickly she didn’t like that.”

There were also some jealousy issues. At first, Cait “couldn’t stand” Chris spending time alone with Matt, and Matt said it took him time to fully accept that Chris loves both of them equally.

But eventually they were able to figure it out. Now, things are great.

Related: Nico Tortorella opens up about his sexuality, polyamory, and when you’ll get to see him naked

“I had never been with two people at the same time before,” Cait says. “It’s different strokes for different folks but I would say it’s a pretty fun sex life.”

Today, Matt says he identifies as homoflexible, while Chris and Cait both say they’re bisexual.

“I like guys and I’m open, flexible to women,” Matt explains. “I prefer men. ‘I guess I had an awakening after I had a sexual experience with a women. It is just another body, another soul, a connection that I can have.”

The thruple recently celebrated their union by getting matching tattoos to indicate their bond is “for life.” 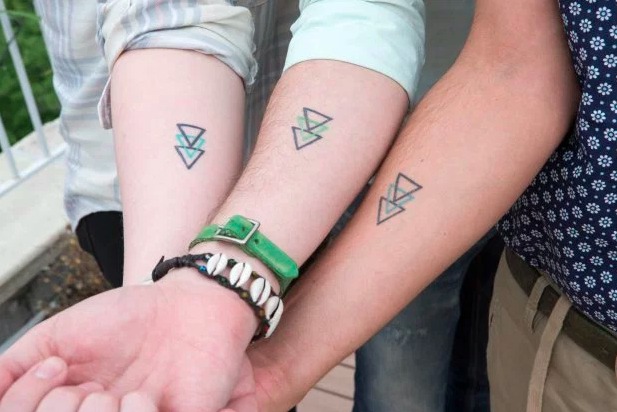