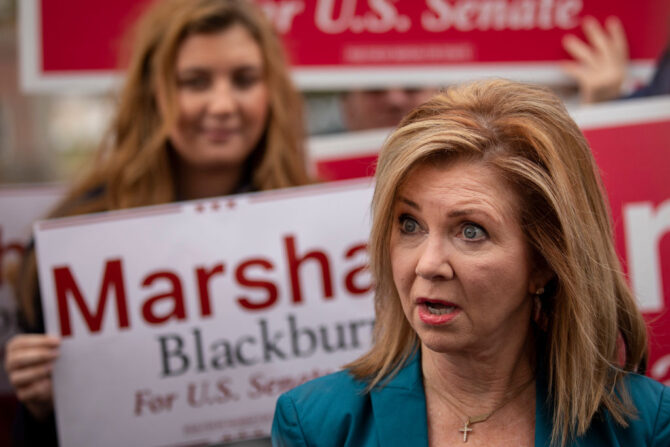 Former-Home-Shopping-Network-sales-gal-turned-U.S.-congresswoman Marsha Blackburn is trending on Twitter this morning after she went on Newsmax to call for women’s rights activists peacefully protesting the Supreme Court potentially overturning Roe v. Wade to be jailed.

Related: Master of communication Marsha Blackburn once again has folks wondering “is she really that dumb?”

“They should haul all these people down to police headquarters, they should book them,” Blackburn said while speaking about the who people that gathered outside Justice Alito’s house last night to sip wine, nibble cheese, and protest women’s rights being stripped away. “They’re trying to change the outcome of a SCOTUS decision, and they’re doing it by showing force and intimidation.”

Marsha Blackburn says protesters outside Justices’ houses should all be arrested: “They should haul all these people down to police HQs, they should book them .. They’re trying to change the outcome of a SCOTUS decision, and they’re doing it by showing force and intimidation.” pic.twitter.com/aXnxQ3We1N

Blackburn’s remarks are ironic, to say the least, considering that after Joe Biden won the 2020 presidential election, she released a joint statement with fellow Tennessee Sen. Bill Hagerty stating their plans to take a “united stand against the tainted electoral results from the recent Presidential election.”

“American democracy relies on the consent of the governed,” the statement read. “Protecting the integrity of the electoral process is paramount to preserving trust and legitimacy in the final outcome.”

In the end, Blackburn, who got her Bachelor’s degree in home economics, ultimately voted to certify the election results. But then a few weeks later she voted to acquit Donald Trump after he incited a deadly insurrection on the U.S. Capitol in an effort to overthrow those very election results.

Hey #Marsha, the purpose of protesting is to bring about change. The right to peacefully protest is protected in the 1st Amendment. And, its not a crime to try to influence the Court’s decisions. Refer to the Constitution you swore to protect and defend.#FreshWords#RoeVsWade

Either free speech is absolute or it’s not.

Sen. Marsha Blackburn demanded that SCOTUS protestors be "hauled off and arrested." By a unanimous vote, Congress has asked FEMA to intervene on behalf of Marsha's hair and extract all the families and livestock trapped inside it pic.twitter.com/EapeyXv1GC

A pox on Marsha Blackburn.

Her degree is in home economics, not law.

These are the same folks who believe the 2nd amendment allows them to take up arms against their own govt. How can they believe that any protest, violent or otherwise, is wrong?

The only thing more corrupt than Marsha Blackburn is her hair

While you’re here, check out this clip of Blackburn plugging holiday ware on the Home Shopping Network back in the ’80s…

Whenever Marsha Blackburn talks, all I hear is this clip of her from the Home Shopping Network in the 80s.pic.twitter.com/fBWTJqfg4V