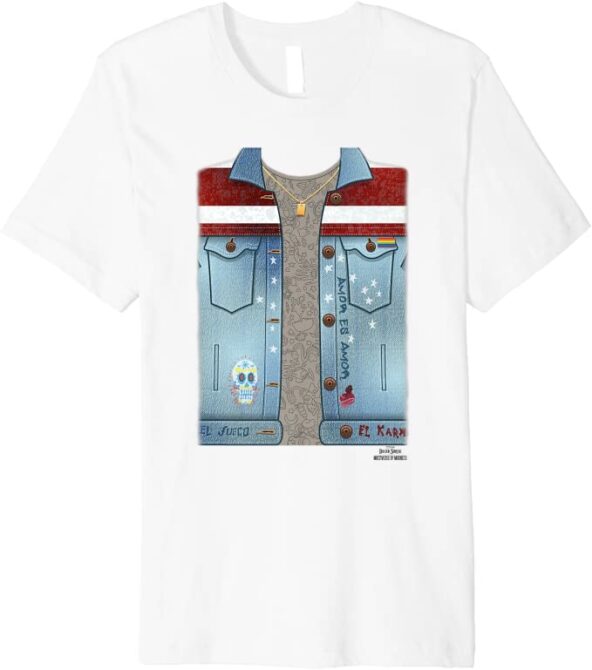 An early look at a t-shirt costume has set fans of the Marvel Cinematic Universe abuzz. The reason: the costume features a pride flag pin, hinting that the MCU could be about to welcome another queer superhero.

Actress Xochitl Gomez will don the tights of lesbian superhero America Chavez/Miss America in Dr. Strange in the Multiverse of Madness later this year. The character, first introduced in the comics in 2011, is an out and proud lesbian hero. The announcement that Gomez would take on the role raised fan hopes of seeing a lesbian hero join the ranks of the Marvel roster, though historically, Marvel doesn’t have the best track record when it comes to LGBTQ inclusion.

Related: One actor wanted this beloved Spider-Man character to be queer. Marvel nixed the idea.

The t-shirt, however, offers new hope, as it is modeled on the Miss America costume jacket, and features the pride pin. The shirt also features a hand-scrawled message of “Amor es Amor,”  Spanish for “love is love” on one side of the jacket. Marvel has yet to release images of Gomez in her full Miss America costume, and plot details on the new Dr. Strange film remain predictably mum. As such, the look at the t-shirt–sold as official Marvel apparel–could offer fans a first hint at Miss America’s storyline.

In the comics, Miss America possesses the power of super speed and the ability to punch holes in the fabric of spacetime. That could come in handy, as the official plot description of the movie claims it will see the titular sorcerer unleash “a forbidden spell that opens the door to the multiverse, including an alternate version of Strange, whose threat to humanity is too great for the combined forces of Strange, Wong, and Wanda Maximoff.”

The introduction of Miss America follows a trend by Marvel to include more LGBTQ characters. After several years of false starts, the studio finally established a canonical gay couple in the film Eternals last year.

Subscribe to Queerty for a daily dose of #entertainment #americachavez #dr.strangeinthemultiverseofmadness stories and more