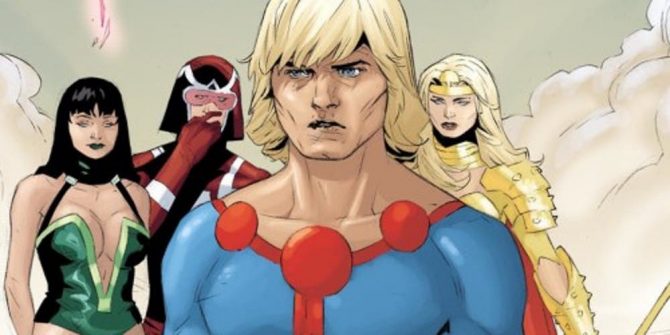 “Well it’s accurate in that we’ve talked about [it for] a long time,” Feige told website io9. “You look at the success of Captain Marvel and Black Panther. We want the movies to reflect the audience and we want every member of our global audience to see themselves reflected on the screen. And that’s what we’ve been doing for a long time. And certainly, that’s what we’re focusing on going forward.”

Related: The Academy Award-winning director of ‘Precious’ is planning a gay superhero movie

For the uninitiated, The Eternals follows a group of superhumans who gain powers from genetic meddling by an alien race called the Celestials.

After years of warring between factions that wanted to rule humanity like the Deviants, and the more benevolent Eternals that saw themselves as human, the latter migrated to space, founding a colony on Uranus (seriously). They’ve since returned to Earth on occasion, forming bases on Atlantis and Mount Olympus, fueling myths among ancient human cultures.

In modern times, the Eternals have come to Earth as superheroes and joined forces with the Avengers. Much like other Marvel superheroes, Eternals can possess specialized powers like flight or super strength in addition to the near-immortality that characterizes their species.

Rumors about The Eternals have persisted since the first appearance of Thanos–a Deviant–in The Avengers. In 2018, Feige announced that a film version had gone into development, with Oscar-winning actress Angelina Jolie (herself a member of the queer community) set to play the heroic character Sersi.

At present, Marvel has yet to announce which characters will comprise the rest of the team line-up in the film, as well as the character that will identify as gay in the film. Several actors have confirmed to have tested for the role, however, including Wilson Cruz and Brian Jordan Alvarez. Filming begins this August.