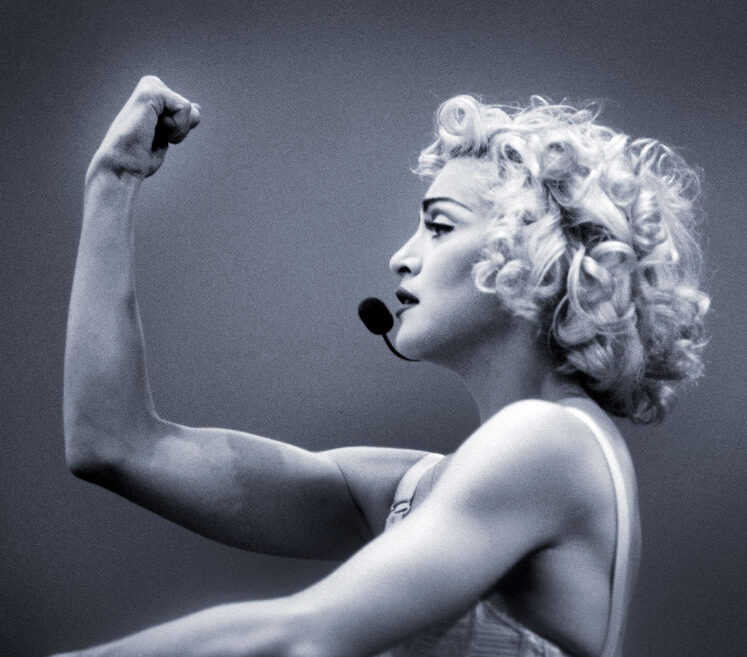 Encyclopedia Madonnica was first released by St. Martin’s Press in 1995 and billed itself as “the first appraisal of all things Madonna that documents the entire Madonna phenomenon.” Since then, it has undergone one major update–when it turned 20 years old in 2015–and growing from a modest 207 pages to an astounding 604 pages.

Now, he’s just released a 2022 update and, at 676 pages, it might be the longest and certainly most comprehensive tome about the pop star ever written. The book, out now, is currently #1 in Music Encyclopedias on Amazon.

We had a chance to talk to Rettenmund about the latest update and what fans can expect from it, Madonna’s most recent musical projects, his dream Madonna collaboration, and the Madonna biopic that may or may not be happening. Here’s what he had to say…

Encyclopedia Madonnica has just gotten its fourth update since it was first published in 1995. What can fans expect from the latest edition?

I did an entry-by-entry update, so I was able to correct any mistakes, update old entries with new knowledge and also include all of her performances and releases and controversies since 2016. Even as a not-so-casual observer, I was shocked how many times she has performed live even since the end of the Rebel Heart Tour, starting with an impromptu concert for Hillary Clinton in 2016 and ending with her Terminal 5 performance last month.

Along with updates and the entire Madame X era (which did eventually end!), I included quite a few new or new-to-print interviews, most prominently with Desperately Seeking Susan director Susan Seidelman (who gave me wonderful, never-seen grabs from Madonna reading with various actors for the film–including Bruce Davison, who was trying out for Gary Glass) and the first Madonna-centric interview with the great Liz Rosenberg in 30 years.

Most obviously, there’s a fantastic new, never-seen cover image by Andrew Caulfield that was taken in early 1984 as part of her “Borderline” music video sessions.

I imagine putting this thing together was a Herculean task. Is the work ever finished? How long do you plan to continue updating the encyclopedia?

The next and final update will come when she dies or I do. … It’s a never-ending process. I just move on to other things, but always come back to it.

Madonna has been revisiting a lot of her old music lately. In addition to releasing the compilation album “Finally Enough Love”, she just dropped a new remix of “Hung Up” with Tokischa. She’s generally not someone who looks back, but she seems to be enjoying this journey through her back catalog. What do you make of it all?

Madonna is the least sentimental person possible, she is not comfortable aging and she does not like to take the easy or conventional route if she can avoid it. These things conspire against her doing things that could be seen as “legacy artist” behavior. She does cave sometimes, though (Re-Invention Tour comes to mind), and so while she isn’t nostalgic, I think she came up with a way to do a hits retrospective–it was time for one in honor of her 50 #1 dance hits–without simply shoveling out the same stuff. She had Mike Dean come in and remaster, and she is reimagining some of her most perfect songs in unconventional, current ways.

Not everybody will want a new “Frozen” or “Hung Up,” but I see this all as icing on the cake and in no way overwriting the originals. I think she deserves credit, not criticism, for working with new artists and allowing her pristine catalogue to be cracked open and tinkered with. For someone often accused of taking herself too seriously, she is really experimental with these mixes, and with her duet partners.

What’s one thing you would like to see (or hear) from Madonna that we haven’t yet?

I’d like her to do a definitive photography book encompassing the visual-arts aspect of her career, I’d love her to do an in-depth autobiography, I’m game for a proper hits tour and I’ll take a freestyle song, please.

I wish she’d canceled her Madame X Tour (which I liked) and addressed her hip issue sooner for her own good, but probably from a careerist perspective, it had to be The Next Best Thing. It wasn’t her absolute worst movie, but it was her follow-up to Evita, which was arguably pretty great and had set her up to continue making films.

It’s not up my musical alley, but I think it’s hypnotic and I give her credit for doing something that didn’t remind me of her mom at all.

The Madonna era you’d love to return to?

I mean, you can’t top Boy Toy or Blond Ambition for sheer inspiration and excitement and universal impact. I know people love 1992, but that was the beginning of the wall of criticism, so it wasn’t fun to live through.

Speaking of Madonna’s movies, let’s talk about the biopic that may or may not be happening. A lot of people are crapping on her for writing and directing the film herself. I personally think it sounds fascinating and very on-brand for a woman who has always liked to have tight creative control over everything she does. What’s your take?

I’m nervous that anyone would direct their own biopic. I don’t trust Madonna’s memory. She has misremembered a lot, which makes sense since so many things have happened to her. … I remember her reacting negatively to that script for an unauthorized biopic based on dialogue she said she’d never say, but there was footage of her saying it! But if she is fact-checked, I mean, who could resist wanting to see what she would present as her definitive statement about what her life was like?

I would love for the movie to happen, but I’m losing hope, considering Julia Garner was offered the role but has never publicly accepted, and Madonna has been floating the idea of doing it as a limited series instead, and asking fans if we want a tour (instead of [the biopic]). I’m really not sure if it will come to pass. I will be first in line if it does — can you imagine all the things we have no idea about?!

Another movie question… I recently rewatched W.E. after Queen Elizabeth’s death. I hadn’t seen it since it came out ten years ago and had forgotten how visually stunning it is. Also, the soundtrack is incredible. All in all, it’s not a bad movie, especially for Madonna’s first stab at directing (Filth and Wisdom excluded). What did you think of the film?

W.E. was a very promising feature debut. I liked half of it–the period-piece half. I’m no fan of that couple, but she handled that story well and it looked great and her casting impulses were impeccable–she had Oscar Isaac and Andrea Riseborough in a feature before I’d ever heard of either!

I actually saw Oscar at a Dune screening and told him I’d been a fan since W.E. He was shocked and said something about how that’s not usually the one that gets mentioned. I told him I thought it had been unfairly maligned because of who its director was, and he said, “I agree with you.”

Do you think Madonna is unfairly criticized when it comes to her cinematic endeavors?

There is no doubt she’s over-criticized. [W.E.] was a fine film. I remember Patti Smith at the premiere–she’d seen it twice–raving about it. I also remember getting into a test screening and all the people were saying positive things until it was brought up that Madonna directed it. “Oh, that’s why I didn’t like it that much,” said a woman next to me who had just been admiring it.

Nobody else figured this out, but I glanced back and, while we were talking, Madonna had come into the back of the theater to listen. I think she is very hardened from all the potshots over the years. Not that she doesn’t deserve to be called out when she isn’t very good or does something objectionable, but I think she is on blast 24/7, and it just makes her dig in her heels.

She definitely has more than her fair share of haters.

When it comes to Madonna hate–and I’m sure the comments will be filled with clever observations about Baby Jane Hudson and how you can tell a woman’s age by looking at her hands–my policy is we should remember the incredible stuff Madonna’s capable of, remember what she has done for LGBTQ people, and remember that while nobody should feel they have to like her, they also shouldn’t feel they have to hate her, either. After that, proceed with fair criticism.

Last question: As the guy who literally wrote the Madonna encyclopedia, what’s one piece of Madonna trivia most people probably don’t know?

She almost remade [the 1930 Marlene Dietrich musical] The Blue Angel. Her ex Tony Ward (who seems to be full Q Anon now) was almost cast as the gunman in her “God Control” video. And on the [updated] cover of my book is a previously unseen gun-metal heart-shaped locket by her former stylist Maripol, who said inside that locket was a picture of… Madonna.