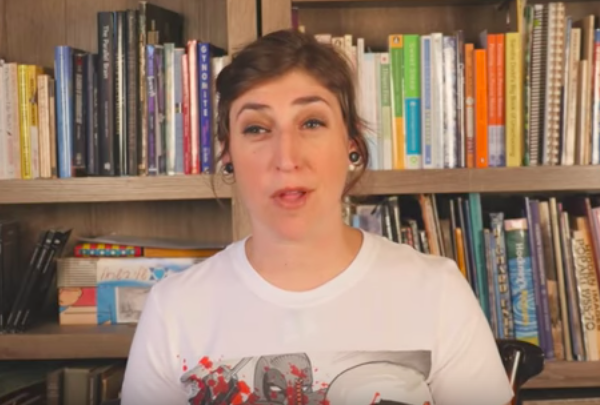 In a new vlog shared to her YouTube channel, actress Mayim Bialik, better known as “Blossom” from the hit 90’s sit-com, revealed that she just doesn’t “get” open relationships.

“And everyone involved in this relationship knows about it!”

Things only go downhill from there.

Bailik goes on to explain that human beings aren’t “biologically wired to be monogamous. Men especially.”

Then she spews some Human Sexuality 101 bullsh*t about how men produce millions of sperm a day, and women produce one egg a month, so women have to be more selection about who they have sex with, and blah, blah, blah.

Then comes the judgement.

“One relationship is more than enough to me,” Bailik, who clearly doesn’t grasp the concept of polyamory, says. “How do you give to more than one person?”

She continues, “While I get that having sex with lots of people can be fun. I worry that open relationships are fostering a false sense of liberation.”

“It’s tremendously heartbreaking when a relationship is in trouble, but it would never occur to me to look for someone else to love or have sex with if the relationship I was in wasn’t working.”

“Well that was deeply heteronormative,” one person writes.

“For someone who is as vocal as she is about being a supporter of LGBTQIA rights, you would think she could take ten seconds to mention where they are supposed to fit in to her antiquated ideas about sexuality,” another person adds.

“It’s very simple,” a third person explains, “to some people it DOES work. That is no wrong or right. Better or worse. Just people doing their choices.”

Related: Study: Gay Men Are Figuring Out How To Make Open Relationships Work

Blogger Becky Scott over at The Schmooze sums up the problem with Bialik’s argument perfectly:

The truth is we’re all individual human beings with different approaches to sex and relationships. You can speculate all you want about how evolution governs the personal relationship decisions made by a human being but, in the end, all you really need to understand is this: It’s absolutely none of your business.

And that seems to be what Mayim Bialik really doesn’t get about open relationships.

We would add that, Blossom, if you’re reading, the next time you don’t “get” something, rather than searching within yourself for the answers, try asking people with some experience in the matter to explain it to you.

Watch Bialik run her mouth on something she clearly doesn’t understand below. Or don’t.