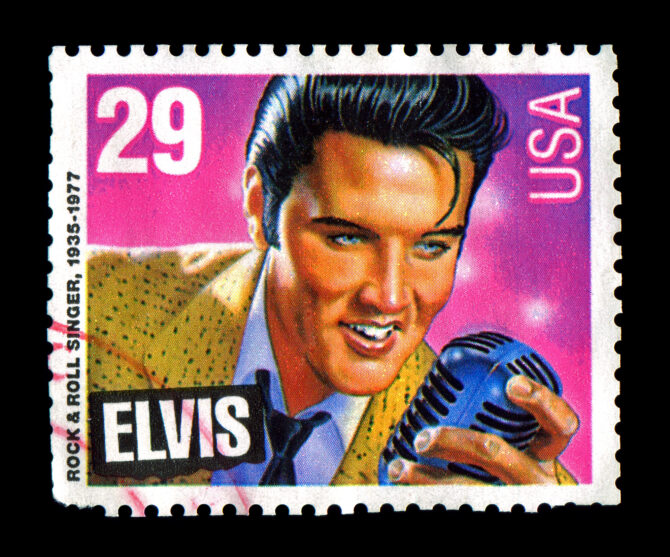 With Baz Luhrmann’s much anticipated film Elvis arriving in cinemas this week, renewed interest in the famed singer will no doubt follow. But it’ll take a certain kind of super fan to shell out the asking price for The King’s bedazzled jockstrap.

While the item would no doubt be the talk of any Pride party, it’s safe to assume the hefty $37.5K price tag means the jock is more likely to stay safe and sound in its accompanying frame. What a pity. The intimate undergarment, which features Elvis’ initials and rhinestones galore, was handcrafted by a fan and reportedly worn regularly by the star.

Prior to his untimely death in 1977, Elvis subsequently gave it to his cousin Billy Smith’s son.

Some time after, the piece became part of the Elvis Presley memorabilia collection belonging to singer Jimmy Velvet, who was a close friend of Presley.

It last popped up for sale in 2020 by Paul Fraser Collectibles. “[It’s] Extravagant. Absurd. Sexually potent. This rhinestone-studded jockstrap is pure Elvis Presley,” said Daniel Wade, a representative of Paul Fraser, at the time. “I’m sure the new owner won’t be able to resist wearing it out on a Saturday night — the Elvis magic will work wonders, I’m certain.”

Well, whoever that new owner was, they’re ready to pass the torch.

The one-of-a-kind jock is now listed on memorabilia site 1st Dibs, and comes with a certificate of authenticity and free shipping. What a deal!

In related (old) news, Russell Crowe’s jockstrap from Cinderella Man went up for auction in 2018 and was purchased by comedian John Oliver, who in turn donated it to Alaska’s last operating Blockbuster Video store.