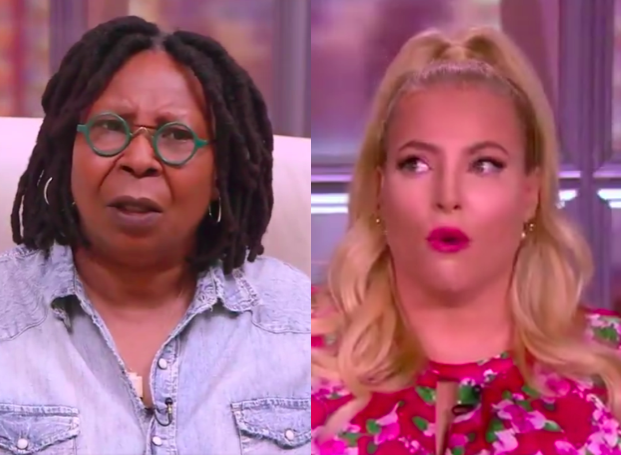 Whoopi Goldberg wasn’t having any of Meghan McCain‘s obnoxious entitled behavior on The View this morning after she demanded to know why she was being cut off to go to a commercial break.

The women were in the middle of talking about Rep. Marjorie Taylor Greene‘s recent comments in which she compared House members being required to wear masks on the chamber floor to Nazis making Jewish people wear gold stars as they ordered them into gas chambers.

“We can look back at a time in history where people were told to wear a gold star, and they were definitely treated like second class citizens,” Greene said, “so much so that they were put in trains and taken to gas chambers in Nazi Germany. And this is exactly the type of abuse that Nancy Pelosi is talking about.”

Most people would agree that Greene’s anti-Semitic remarks were completely reprehensible. But not Meghan McCain. She argued that Democrats can be just as anti-Semitic and so people need to stop singling out Greene.

Eventually, Goldberg, clearly annoyed, announced that they needed to go to a commercial, which sent McCain flying into a rage. She demanded to know why she was being silenced. And that’s when things got really dramatic.

Whoopi cutting Meghan McCain off to go to break was priceless. ? #TheView pic.twitter.com/xdhgae2yIl

It’s only Monday and Meghan McCain is already back to being intolerable. I’m waiting for Ana Navarro to be a permanent host to replace her. #TheView pic.twitter.com/81SL58H3aT

Having different opinions is fine. Acting like you own the stage & are better than everyone else AND disrespecting your coworkers & viewers is not. Period. Full stop! #Whoopi #TheView #MeghanMcCain

Whoopi during commercial breaks after going at with Meghan #TheView pic.twitter.com/Jz2gkrmWE5

whoopi saying she doesn’t know what meg is talking about literally speaks for all of us. #theview

The cut to the clapping virtual audience while Whoopi goes in on Meghan is absolutely sending me into orbit lmaooo https://t.co/SNBU7DAPGf