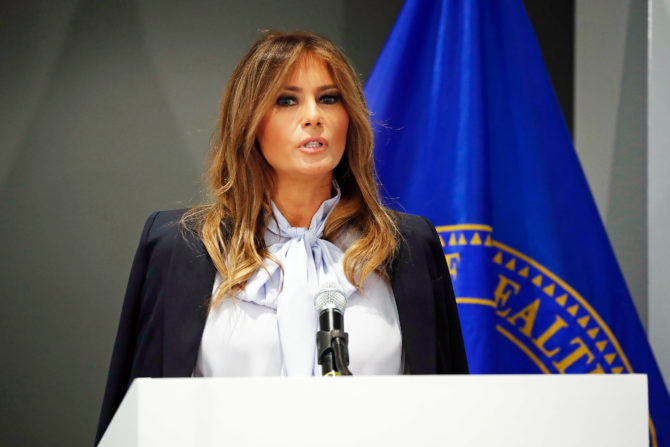 Without the slightest trace of irony, first lady Melania Trump warned against the “destructive and harmful” uses of social media in an impassioned speech earlier today.

Speaking at a cyberbullying summit in Rockville, Maryland this morning, Melania said: “In today’s global society, social media is an inevitable part of our children’s daily lives. It can be used in many positive ways, but can also be destructive and harmful when used incorrectly.”

She continued, “This is why Be Best chooses to focus on the importance of teaching our next generation how to conduct themselves safely and in a positive manner in an online setting.”

Meanwhile, over on Twitter, Donald Trump was busy hurling insults against John Brennan, who he labeled a “hack” and “the worst CIA Director in our country’s history.” This was just days after he called former White House aide Omarosa Manigault Newman a “crazed, crying lowlife” and a “dog.”

“Let’s face it,” Melania said at the summit this morning, “most children are more aware of the benefits and pitfalls of social media than some adults, but we still need to do all we can to provide them with information and tools for successful and safe online habits.”

When asked about the awkward disconnect between FLOTUS’s anti-cyberbullying campaign and her husband’s cyberbullying habits, the first lady’s communications director Stephanie Grisham downplayed the whole thing.

“She’s addressed this before,” Grisham told CNN. “She is well aware of the criticism, but that will not deter her from doing what she feels is right. I would hope most people in this country are proud that they have a strong and independent first lady who only has the best interests of children at heart–I know I am.”

So how do the “people in this country” feel about it? See for yourself…

My husband is an arsonist who keeps burning down everything in sight but we really need to set a better example so kids stop playing with fire. That’s what we hear when Melania Trump talks about cyberbullying.

Melania trump speaking about her nonexistent Be Best, cyber bullying campaign whilst her disgusting husband attacks people on Twitter every single day without fail as well as her being a birther is hypocrisy at its worst texture.

She warned against "destructive and harmful" uses of SM
And she should know, considering her husband is destroying the world via SM.#MondayMotivationpic.twitter.com/ZY0GJPCofl

First lady Melania Trump warns of "destructive and harmful" side of social media in cyberbullying panel. Last week, her husband called Omarosa "a dog" in a cyberbullying tirade. pic.twitter.com/nLhVWEowdp

First Lady Melania Trump will be speaking out against Money-Laundering and Tax Evasion during this afternoon's conference session.

Did anybody google search Melania Trump's speech today along with the words "Michelle Obama" yet?

Melania Trump speaks at a cyberbullying summit today. Maybe tomorrow Karen Pence will Grand Marshall a Pride parade. Then Wednesday, Paul Ryan’s wife can lead a living wage rally. Sure, why not. #BeBest

the Queen has spoken
12