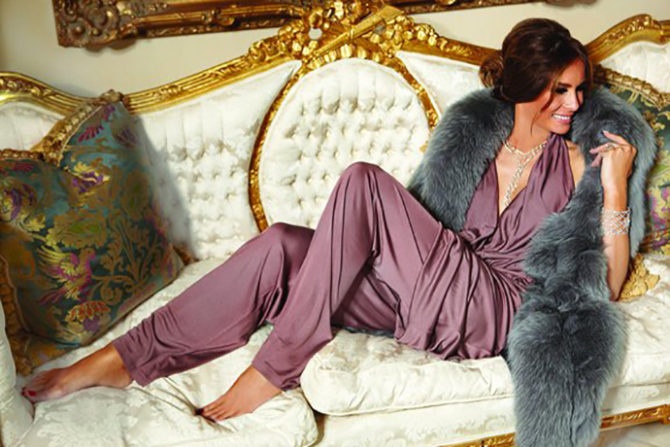 “Mrs. Trump has a deep appreciation for the historical aspects of the White House,” Melania’s senior advisor, Stephanie Winston Wolkoff, said in a statement, “and with Tham’s traditional design and expertise, they are focusing on a seamless integration of elegance and comfort into where the President, the First Lady, and Barron will be spending their family time and calling their home.”

Kannalikham, too, made a statement, “I am honored by the opportunity to be working with the First Lady to make the White House feel like home.”

Given what their other home looks like, we’re sure the First Lady won’t skimp on using tax-payer dollars to line the walls with gold leaf, as well as add lots of gilded, over-the-top furnishings, tacky drapery, and gaudy chandeliers.

And all for a house she doesn’t actually plan on living in.

Last week, a source told Us Weekly that Melania was “reevaluating” her initial plans to move into the White House in June, after Barron finished up the school year, and was instead considering staying in New York indefinitely, at a reported taxpayer cost of $1 million per day, or $1.4 billion over the course of four years.

“They could go either way right now,” the source said. “They will ultimately do what’s best for Barron.”

Obama White House decorator Michael Smith told the Washington Post that Kannalikham “joins a very select club and is one of the people who have been fortunate enough to work for first families. As I’ve said many times, every time you move a chair or lamp in the White House, it is part of the fabric of history.”