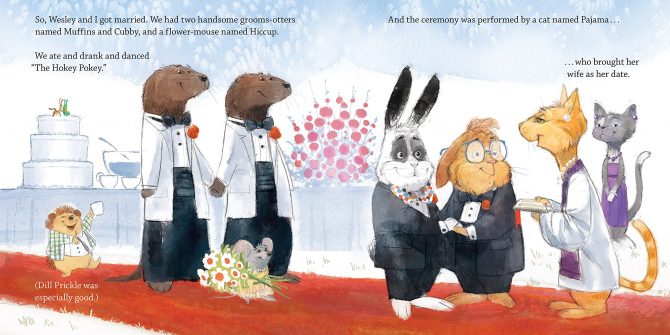 A gay bunny rabbit has caused a massive backlash in the literary world, landing a children’s book at the #2 slot of most challenged books in the United States.

The reason: Marlon Bundo, the pet rabbit of US Vice President and noted homophobe Mike Pence. Bundo became the subject of two children’s books last year, including A Day in the Life of Marlon Bundo, a book authored by Jill Twiss and commissioned by the late night comedy show Last Week Tonight with John Oliver. Oliver and Twiss, as you might recall, constructed the book as a send-up of Marlon Bundo’s A Day in the Life of the Vice President, authored by Mike Pence’s daughter Charlotte Pence.

In A Day in the Life of Marlon Bundo, the young gay titular bunny meets another dashing male rabbit, and the two decide to get married. A mean-spirited stink bug slanders the two on the way to the wedding chapel, saying male bunnies can only marry female bunnies. Ultimately, Marlon and his boyfriend Wesley resort to grassroots activism and rally their woodland neighbors to legalize same-sex marriage and kick the stink bug out of the woods.

Twiss and Oliver intended their book to raise awareness of Mike Pence’s long-documented hostility toward queer people. Given the subject matter, it should also come as no surprise that the American Library Association named it as the second most challenged book of 2018. Only George, a children’s book about a transgender child, received more criticism and nabbed the #1 spot on the list.

Still, A Day in the Life of Marlon Bundo outsold Pence’s book by a significant margin, and even Charlotte Pence herself claims to own a copy. All the proceeds from the book go to noted LGBTQ charities The Trevor Project and AIDS United. Last year, Charlotte Pence seemed to endorse the parody, saying “I also want to support those charities — I really mean that. I think that everybody can come together over Marlon.” She also hinted at a forthcoming sequel to her novel about Marlon.

We only hope that means more same-sex adventures for Marlon and Wesley in the future as well.

music with a message
13