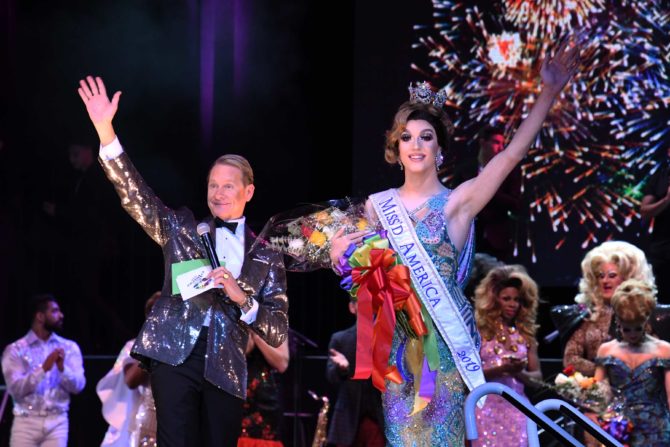 The New York City-based drag queen has just won the 25th annual Miss’d America Pageant in Atlantic City. It’s a full-circle moment for Trenta, who first caught the pageant bug when she performed as a backup dancer for fellow NYC queen Sapphira Crisal at this very same competition a few years ago. “It feels like a monumental hurdle that I just cleared that I didn’t think I’d be able to clear.”

Backstage at the Borgata Hotel and Casino’s event center, Trenta’s small entourage of assistants and back-up dancers are helping to pack up all of her pageant paraphernalia. There are wigs and costumes, makeup, jewelry, padding, and, of course, bouquets of flowers. “To be in a pageant, it takes a village,” Trenta will tell VIP guests of the Greater Atlantic City GLBT Alliance, the organization that runs Miss’d America, tomorrow at brunch. For Trenta that village is populated by dresser and “packmule” Kyle Amoroso; choreographer Louis Reyes Chavez; dancers Eric Bell, Nick Lancellotti and Kevin Mimms; and manager Lindsey Kay.

Costumers Danny Logan, Pierretta Viktori, and Bryce Huey Turgeon each designed outfits for Trenta, and Nolan Yost designed the hair she wore in the evening gown portion of the competition.

But a village isn’t all it takes to compete in a drag pageant. It also takes a ton of time, hard work and especially money. Unlike the riotous, devil-may-care version of drag you so often see in gay bars now, where the flaws and fuck-ups are part of the show, pageants require a degree of poise and polish that can be financially prohibitive for many working queens to achieve.

“Balancing the budget—the financial cost of pageants—is extremely difficult,” Trenta admits. “Personally, I really struggled with that. I’m currently in the middle of trying to pay off all this!” 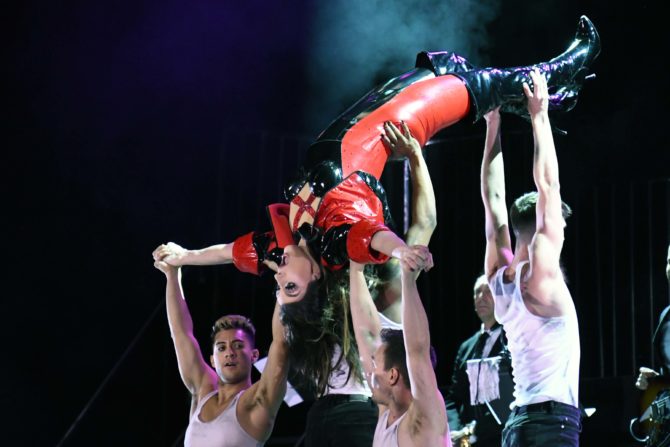 “I spent over $200,000 to compete in Miss Continental,” says Miss’d America 2018 Pattaya Hart. Originally intimidated by the rigors of pageants, she now has her eye on national competitions. As Miss Southern California Continental 2018, she made it into the top five in Chicago-based pageant system this year.

Hart considers the high cost of competing an investment. The exposure that comes with her pageant titles has lead to a significant increase in her bookings. “You can compete as a solo talent,” she says. “You don’t have to pay for all the dancers. But I did tell Adriana, ‘If you want to dance, don’t be cheap and have two dancers. Do it full out.’ Spend some more money and it will be worth it. You’ll have the video [of your performance] and you can post it everywhere. You can use it to audition for Drag Race or send it to clients. Maybe they have big budgets.” Hart works with Screaming Queens Entertainment, a boutique talent agency that provides drag queens, celebrity impersonators and other entertainers for private parties. “I’m the first one they call because of the pageant footage. People know me.”

“For a local queen who’s hustlin’ and bustlin’, winning something like this gets your face out to an even bigger audience,” says Miss’d America 2015 Honey Davenport.

In the past, Hart has launched a GoFundMe campaign and sold exclusive t-shirts online to raise money to compete. Trenta works three jobs in addition to her drag gigs. But at a time when a homemade audition video can get a queen barely into her 20s cast on Drag Race, why bother scraping together the funds it takes to compete in pageants?

“Since RuPaul’s Drag Race we’ve had a huge drop in participation,” says veteran pageant queen Margeaux Haze. “If you’re on Drag Race and get thrown off the first episode, you’ll still make $2,500 a booking.”

Compare that to Haze’s less than rosy cost-benefit analysis of pageantry. “The first pageant I did I spent $15,000,” she says. “The prize package was $2,000. Why do you spend $15,000 to win $2,000? Most pageants, you won’t even get a fifth of what you spent back.” She’s also skeptical of the benefit a pageant win will have on a queen’s money-making potential. A win my raise your profile enough to get you gigs at clubs across the country, but when you factor in travel expenses, you still end up in the red. “Those bookings are $200–$250. It’s just not worth it!”

So why do it? “I came here to say something,” Haze insists. “I felt it was more important to educate about what it’s like to be a 50-year-old drag queen in this industry.”

Every year Miss’d America invites past winners on stage between talent performances. It’s here that you really see the difference between a generation of ambitious young queens raised on Drag Race and social media branding and their foremothers. For Britney Lynn, who walked away with the crown in 2004, the pageant is still about community. “When we did this in the 90s there wasn’t social media. So when you won, you would do the radio stations here locally, and the Associated Press would always pick up the story, so you still go attention even if it was print. And you still walked away with the same feeling [of accomplishment],” she explains. “Now, especially if you promote your platform properly, with all the social media—now you have the opportunity to do more for your community. When you win this competition, it’s not just about the money. It’s what you can give back to the community.”

Haze also feels as though, with this year’s pageant in particular, she is forging a bond with younger performers like Trenta. “She’s half my age and yet we’re making plans to have lunch.”

For younger contestants like Shelby Late, however, placing in a pageant is all about building your personal brand. “I hope I can sell some hair!” the professional wig stylist says of what she hopes to get out of placing second in this year’s competition.

“You become a spokesperson for [the Greater Atlantic City GLBT Alliance],” Davenport says of a Miss’d America win. “So you attach your brand to that brand which makes your brand even bigger. When you get on stage and you have a big huge polished package and the whole world gets to see that—it exposes you. It’s a brand-building opportunity.”

Both Shelby Late and Adriana Trenta say they’re also walking away from this year’s Miss’d America with a sense of personal validation. “A pageant is truly a test of how much you want it and how much you are willing to go through in order to experience the thrill of victory,” says Trenta. “It’s worth the blood, sweat and tears even if you don’t win. If you’re proud of what you did, you can carry that forward to something else, you can keep going. Ultimately it’s worth the cost.”