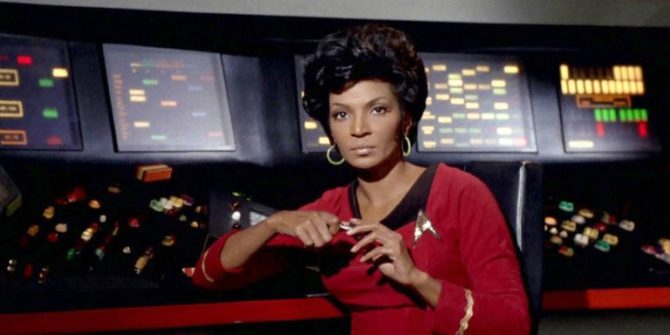 Call it the Butterfly Effect: Sometimes a single act of courage can change the world.

As the nation eulogizes the civil rights icon Dr. Martin Luther King, Jr. on the 50th anniversary of his murder, King’s contribution to future struggles for equality—including that of LGBTQ folks—deserves recognition. King may not have intended as much when he sat down with an actress-supporter back in 1967, but in doing so, he helped create an African-American gay icon who would inspire a generation.

Join us on this journey…

Actress/activist Nichelle Nichols becomes one of the most visible women of color in the world thanks to her role as Lt. Uhura on Star Trek. Dissatisfied with her character’s lack of development, she intends to leave the series and return to theatre. Dr. King, an avowed Trek fan, makes a personal appeal to Nichols at an NAACP dinner to stay on the show, as her visibility will give her role model status to young people of color. King adds that he encourages his own daughters to watch the show for that very reason. Nichols agrees to stay on the series.

NASA taps Nichols to become a recruiter for the space agency. She decides to focus on bringing women and people of color into the fold.

A Trek fan named Sally Ride joins NASA on the basis of her love of Uhura. Ride also happens to be lesbian. 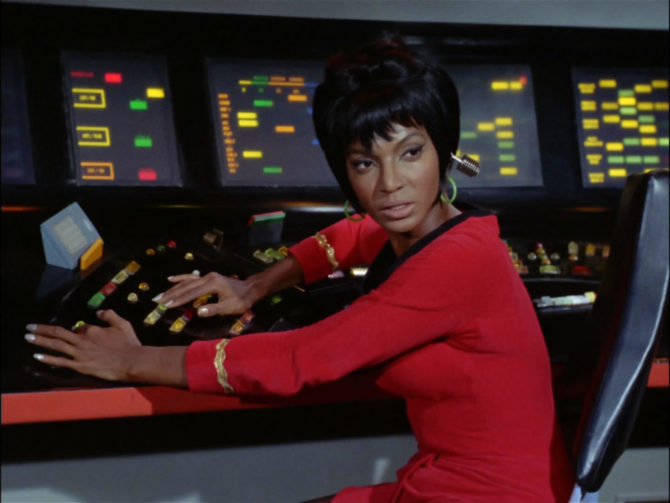 Star Trek: The Motion Picture arrives in cinemas, reigniting interest in the show.

Ride becomes the first American woman and the first LGBT person in space, flying aboard the Space Shuttle Challenger. She repeats the feat in 1984. She again cites her love of Uhura as her reason for joining NASA.

Nichols’ co-star George Takei follows her example as an activist, coming out as a gay man. He becomes one of the leading advocates for marriage equality in the United States.

Embracing her role as a gay icon, Nichols delivers an address commemorating the National Day of Silence and advocating equal rights. She cites Dr. King as a role model for all people striving for justice.

Paramount trumpets the first gay character in Star Trek history by making Sulu ostensibly gay in Star Trek Beyond, courtesy of a hug he shares with a man. Fans roll their eyes, and the movie gets slammed for coping out on the issue.

Uhura & Nichols remain two of the most important figures in sci-fi history for their acting, leadership and role in inspiring women, people of color, and LGBT folks to reach for the stars.