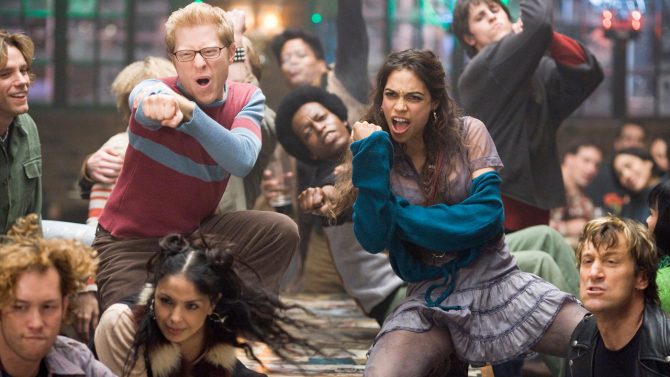 We know, we know: the long-delayed movie adaptation of Rent sure as heck ain’t perfect. Director Chris Columbus doesn’t quite know how to stage the musical sequences so as not to feel like an overlong music video. The movie is somehow less gritty and stark than the stage version when it comes to depicting sex, drug addiction, poverty, and the pain of HIV/AIDS. Though set in New York, the scenery lacks an authentic flavor since it was shot on a backlot on the West Coast. Certain songs and plot points that worked better on stage with a live audience feel awkward and forced on film.

And yet…and yet…even in a bowdlerized, awkward cinematic incarnation, Rent still has power. Jonathan Larsen’s rock score takes on a new fury thanks to music arranger Rob Cavallo, the producer of Green Day’s album American Idiot. The cast, most of whom created their roles on stage, embody their characters with depth and complexity; new additions Tracie Thoms and Rosario Dawson both earn their place alongside the originals. And the story, of course–an adaptation of La Boheme with AIDS substituting for tuberculosis–is as moving now as it was when the show debuted in 1996. With another pandemic ravaging the nation, critics who decried the film’s depiction of the AIDS crisis as dated nonsense seem more cynical and out of touch now than when the movie debuted in 2005.

Rent isn’t a great movie, and your mileage may vary when it comes to enjoying what the film gets right as opposed to its glaring flaws. That said, we still find a lot to enjoy in its music, story and performances, enough so that we can’t write it off as an epic disaster (see also: Cats). With the White House response to COVID-19 in 2020 disturbingly close to its response to AIDS in 1982, Rent can offer a bit of perspective, and maybe a bit of hope too.

get a life
33 comments