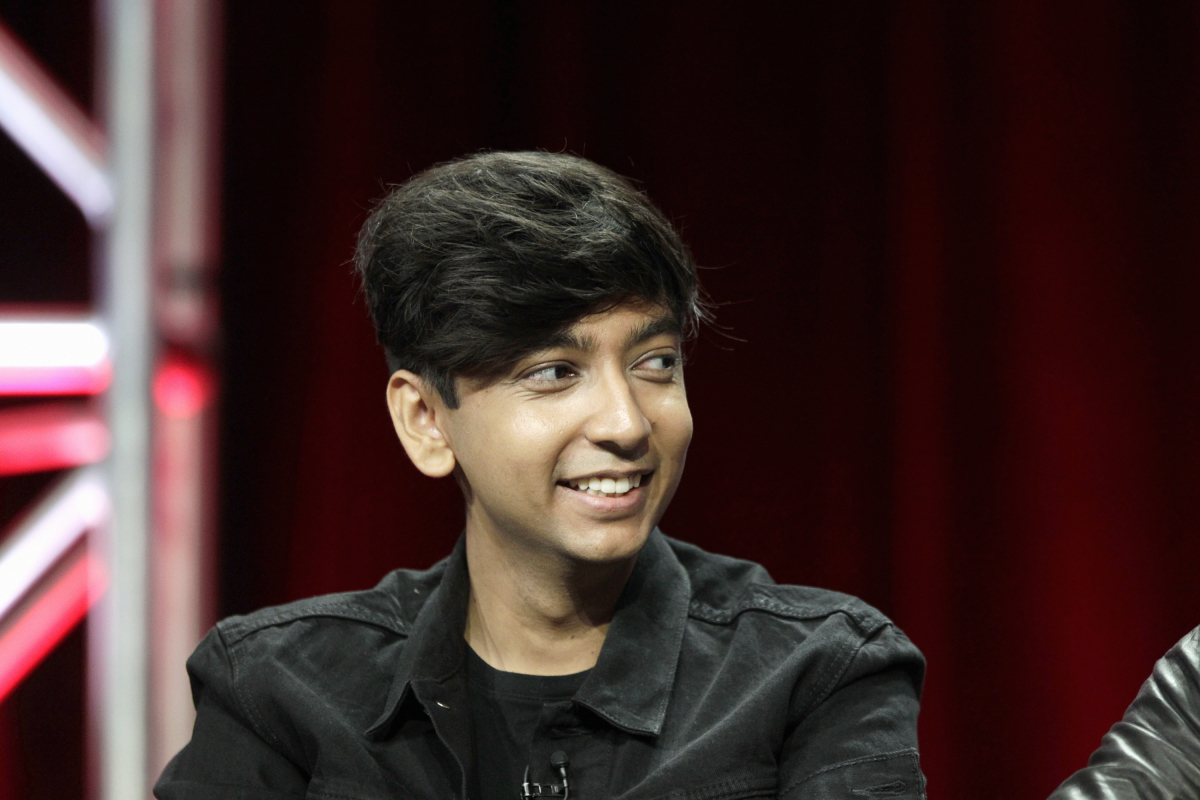 Nik Dodani’s voice sounds a bit harried as he picks up the phone.

He’s just come from filming on the set of Murphy Brown, the revival of the iconic political sitcom on CBS. It debuted September 28, with the original cast of Candice Bergan, Faith Ford, Grant Shaud and Joe Regalbuto returning to take on the era of Trump. But it added a notable newcomer, update for the days of digital technology and particularly partisan politics. Known for his roles in Alex Strangelove, the Netflix series Atypical, and the forthcoming The Maze, Dodani also has a following for his work as a stand-up comic.

On the series, Dodani plays Pat Patel, the technology and social media maestro who helps to keep Murphy & company active on Twitter. He’ll appear as a series regular on this new revival, with new episodes airing each Thursday night on CBS and CBS All Access.

The cherubic openly gay Indian-American chatted with Queerty about his new role, activism and the show’s take on the state of politics in the Trump era. Murphy Brown airs on CBS Thursday nights at 9:30 EST/PST.

Sounds like you’re having a busy day on set?

Thanks for taking the time to chat with us. We love you at Queerty.

Let’s talk about Murphy Brown. You’re the new kid on the set, and you’re coming in with an established cast, and a very highly-regarded one at that. Were you nervous?

At first, I really was incredibly nervous. These folks have known each other for 30 years and worked together for 10 and were such an iconic group of people. But the very first time I met them it was within minutes it was so family-like. They welcomed me in, they welcomed Jake [McDorman, who plays Murphy’s son Avery], they welcomed Tyne [Daily, who plays restaurateur Phyllis]. They really have been the most welcoming cast I’ve worked with. So the nerves went away pretty quickly thank goodness, otherwise, it would be a pretty tough job. And my character, over the next several episodes—he becomes really integrated into the group. It’s been pretty great.

Awesome. How familiar with the show were you before joining the cast?

Yeah, I used to watch reruns with my mom when I was a kid. It was definitely way ahead of its time. I remember watching it and I knew the name Murphy Brown. I actually started watching it from the beginning after I booked it and I had to actually stop a handful of episodes in because I got way too intimidated. They’re so good and the comedy is so smart that the thought of watching all that and then going to work the following day was just too much. So I put a hold on that; I put a hold on watching all of them until later.

Probably smart. And no doubt, you’ll probably have a different perspective after shooting a whole season.

So Diane English, the creator/showrunner has been incredibly collaborative in developing the character. Which is really exciting, because this is a brand new character that doesn’t have to adhere to any kind of history. But at the end of the day, it really is Diane and the writers. These writers are incredible—I definitely can’t take credit for that. These writers have a knack for sort of predicting the political winds. You know, they did that in the original. It’s hard to do now, of course. But I think the way they’re doing it is really smart.

Now I feel a need to ask what’s going to happen later, if the show’s already foreshadowing stuff. What’s the atmosphere like on a set like this, where the show is very charged, very focused on political issues? Are there moments where the cast has objections to the material, or the writers stop and retool for being too liberal or conservative? 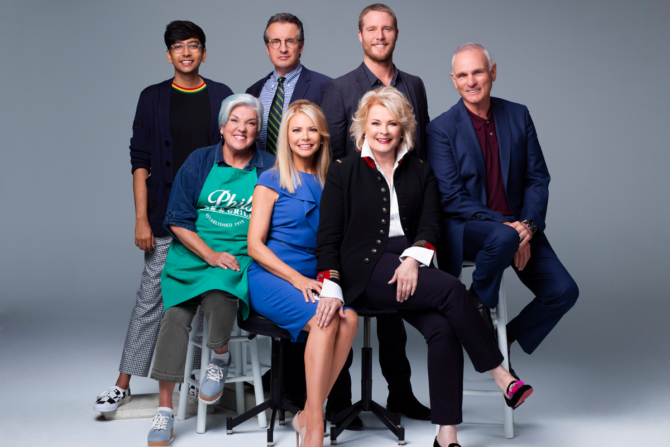 Since we’re talking about political issues on the show, we’re talking about the issues on set. And we’re definitely having a lot of conversations that don’t normally happen on a set, at least in my experience. But it’s pretty great. It’s not an echo chamber. We have our own opinions. And the great thing about this set is that we really listen to each other. Diane and the writers are so open to other perspectives, especially from younger folks. So we’re coming at it from a very different perspective. I’m not going to paint a picture of this awesome-Kumbaya thing, but it is pretty—the conversations are constructive. Stuff on the news definitely affects our moods. Our premiere was the day of the Kavanaugh hearings, which sort of painted our mood, much like the rest of the country.

What statement does it make about younger people today that your character is living in poverty while the people around him are making huge salaries? I would also add that it’s probably also true of the pay disparity between characters—Murphy, Corky, Frank all getting huge salaries while Pat doesn’t.

There’s actually a joke in this week’s episode about that. I think Pat’s joking, that he doesn’t actually live in poverty. I will say that Murphy in the Morning [the fictional cable show that Murphy Brown hosts] does live its values and treats its employees well. But at the end of the day, he is a Millennial, and he’s an entry-level job, and even though he’s director of social media, he’s not going to be paid enough. DC is an expensive city. I think as time goes on the show will kind of amplify those things.

The younger, Millennial generation is inheriting the nation’s enormous debt that Trump has created to give tax cuts to the rich. It’s hard to find work that pays a living wage in the service economy. What’s our future?

That’s a really good question. You know, I think, yeah, our generation has been burdened with some unique challenges that previous generations haven’t had to deal with—skyrocketing student debt, less access to well-paying jobs, the sort of “sharing economy” has sort of exploded, which is cool in one sense because it allows flexibility, but it also is not the best way to make a living wage. Healthcare costs have skyrocketed—all that stuff we hear about all the time. I really do think that the generation below us—Generation Z if you want to call it that—I’m pretty sure they’re going to clean shit up.

Related: ‘Where the Bears Are,’ ‘Riverdale,’ and 11 very queer TV shows to catch this fall

Did you get to meet Hillary Clinton when she cameoed [in the series premiere as a potential secretary]?

I did. Yeah, that was really crazy.

Was that the first time?

Yeah, that was the first time. I met her, I met Huma Abedin, which was awesome, and a bunch of Secret Service, which was really intimidating. But it was pretty surreal. To have her on set was incredible. And, she just came in and killed it. You know, she’s a politician. I figured she’d come in, read the lines, and it would be fine. But her timing was on point, her energy was great. She knew her lines. She was awesome. She was so sweet, and she took pictures with everyone on the show. It was great.

She was really nice. You know, it’s always weird meeting someone who is larger than life and realizing they’re just people at the end of the day. She’s not just a person, but she’s a person. And seeing her interact with her aides, and watching her fumble a line. She’s another person. And I mean, she’s another person that almost became our president, but that’s another story.

That’s something the show has had a lot of fun with—the 2016 Election, just in the first couple of episodes. I know you’ve done a lot of work fighting homophobia in Indian culture—

I wouldn’t say a lot. I’ve written a few jokes. 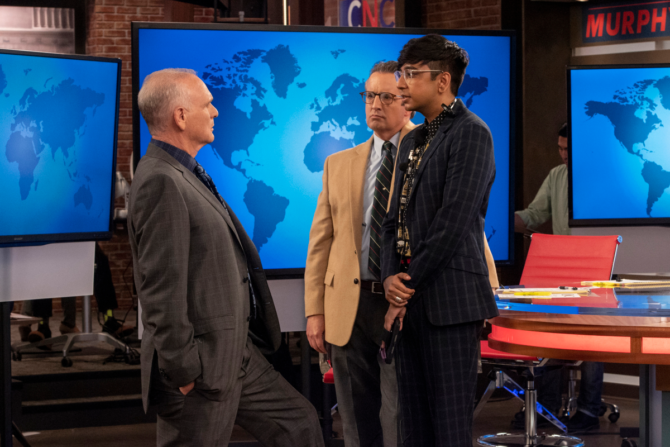 As someone who identifies as Indian-American and LGBTQ, what do you think the biggest challenge is in reconciling those two entities? What’s the biggest obstacle to overcome in terms of that culture?

I feel like a lot of homophobia is very actively anti-gay, in a lot of Christian communities, or Muslim communities or in Jewish communities for example. In Indian culture, there’s more of a general silence about it, versus an active homophobia. There are folks that just don’t ever think about it. It’s not an active hate, it’s just lack of awareness. Which is, you know, not cool, and it’s a different challenge. I definitely think it’s a challenge that’s being addressed, especially by the burgeoning grassroots LGBTQ movement in India right now. And the fact is the people online who are pushing visibility deserve the credit.

So, is there talk of doing another season of Murphy Brown after this one?

I think we all certainly hope so. But you know, that remains to be seen.

What hints can you offer us about what happens to Pat this season?

We get to learn more about Pat and his personal life, which is all I can say.

Final question: I know you’ve done a lot of campaigning for Elizabeth Warren in the past. There’s talk that Senator Warren will run for President in 2020. With your background in political science, do you have a favorite in the Democratic field?

I don’t have a favorite. I think Kamala Harris, Elizabeth Warren—those two are probably my favorite. But I’m optimistic. I think it’s really cool. We’re going to have a crowded field.

Murphy Brown airs on CBS on Thursday nights at 9:30 EST/PST, and is available to stream via CBS All Access.