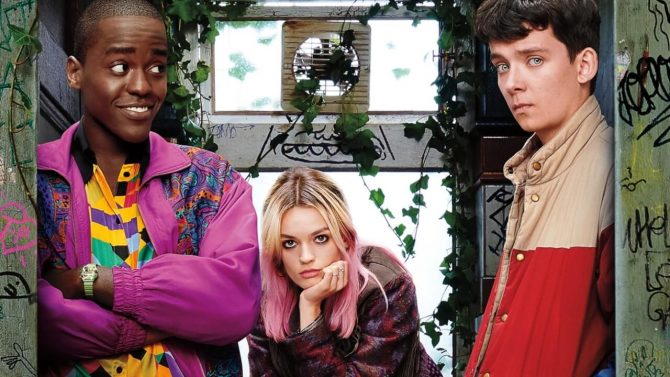 Glitter, makeup, nail polish, and stilettos may never make my shopping list. And as fabulous as Pose’s Billy Porter looked in his tuxedo gown on the red carpet at the Oscars, I can’t imagine ever getting married in one.

This gentleman prefers track pants, t-shirts, and a freshly scrubbed face, but I’m nonetheless drawn to the day-glo queerness of Eric, the breakout character on the Netflix series Sex Education, which premiered in January. He’s so me, and at the same time, so unlike me. We’re both the gay, black sons of immigrants who grew up in an ultra-religious family with a stern but loving father. Yet, we approach the world in such vastly different ways. Warning: Spoilers ahead!

I went through my exhibitionist phase when I favored flashy, look-at-me attire — it lasted two decades, from my mid-teens to my mid-thirties — but I’ve never embraced the art of gender-bending. It took me close to 50 years to try on women’s shoes for the first time, and walking like a “man” while wearing high heels nearly sent me face first onto the floor. (Eric struggles to walk in heels, too.)

Still, as I watched the eight episodes of Sex Education’s first season, I related to Eric in a way I never have to the gay main characters on Glee, Will and Grace, Grace and Frankie, Unbreakable Kimmy Schmidt, and other TV and web comedy series. I credit good writing and excellent acting by Ncuti Gatwa, the 26-year-old Scottish-Rwandan actor who so easily could have coasted by making Eric a flashy, scene-stealing, asexual black gay sidekick (a la Kimmie Smith’s Titus Andromedon, played by Emmy nominee Tituss Burgess). (Extra kudos to Sex Education for its multicultural casting, including dark-skinned black actors in main roles.)

Eric might be the most complex, multidimensional gay black character I’ve ever seen on TV. Yes, he ticks some of the stereotype boxes (his sartorial preference for primary colors and busy prints, his clever and occasionally borderline-caustic wit, his all-talk-little-action approach to sex), but he’s so much more than those check marks. He can be cowering when face to face with a white, homophobic bully in one episode and mad, bad, and dangerous to know in the next one, taking his father’s advice to toughen up a bit too literally.

He hovers comfortably between camp and neutral, without fully committing to either. He’s just Eric. When we first meet him, he’s ogling the 32-year-old hook-up of the mother of his straight best friend Otis. “A big, hot, sticky wet dream,” he calls the hairy hottie. He’s sexy and sexual, sometimes awkwardly so, but neither his sexuality nor his sexual orientation define him, and he’s got his high school-hierarchy priorities, er, straight (cool is so much better than popular).

His personal presentation is loud and proud, but we never really see him angling to be the center of attention, no matter what Otis says. When Otis and Maeve start the sex clinic, leaving Eric on the sidelines, Eric doesn’t try to push his way into the center square. That would be such a “Just Jack” thing to do.

That’s not to say Eric is a perfect gay teen. Like the rest of us multidimensional humans, he can be maddening. He’s ambivalent about Otis’s emerging relationship with Maeve, not because he’s secretly in love with him (a predictable plot point that Sex Education thankfully avoids, though Otis and Eric platonically holding hands and dancing in episode seven is a season highlight), but because it pushes him to number two in his bestie’s life. He encourages Eric to admit his feelings for Maeve and then discourages him from pursuing her with a cruel “She’ll always be out of your league”-type prediction.

When things between Eric and Otis go pear-shaped in the fifth episode, it’s not due to unrequited affection but because Eric doesn’t like being stood up, stranded, and gay bashed on his birthday because his BFF is busy being led around by Maeve, the “lion.” Who does? Like Otis’s consolation love interest Ola, Eric doesn’t want to be the housecat — or the goat.

His observations about Otis and the world around them vacillate between astute and skewed (how could he miss that Maeve was falling for Otis, too?), but he doesn’t make them in an archetypically catty, campy way, overdoing it with semaphoric gestures. Sassy is so not his middle name.

Although he presents himself as being proudly queer, we see his vulnerability and the internal struggle between who he is and who society expects him to be. Gatwa plays it beautifully, particularly in episode six when he tries on a new look: “straight”-acting, “straight”-dressing son and student who’s scowling at school by day and dutifully praising the lord in church by night. Eric can play the role convincingly, but Gatwa conveys his discomfort without the benefit of dialogue or voiceovers. The pain of self-betrayal is evident in his eyes.

I could see where Eric’s contentious relationship with Adam was heading from their first scene together, but not because of anything Eric does after Adam pushes him against the locker. It was all on Adam, who clearly resorted to bullying Eric four years earlier as a way to get his attention. There’s something vaguely homoerotic about his tactile, almost flirtatious taunting.

I was so relieved that Eric didn’t become the gay boy panting after the straight one. When Adam ends up on top of him — literally — Eric doesn’t start the fire. Their detention détente is ugly, nasty, and ridiculously hot. During their final classroom scene together, their pinkies do some of the best acting of the entire season.

In a series packed with vibrant characters who each make a solid impression, Eric, for me, is the best in show, the supporting character most deserving of a series all his own. The center square might not be where Eric needs to be, but it’s where he belongs.