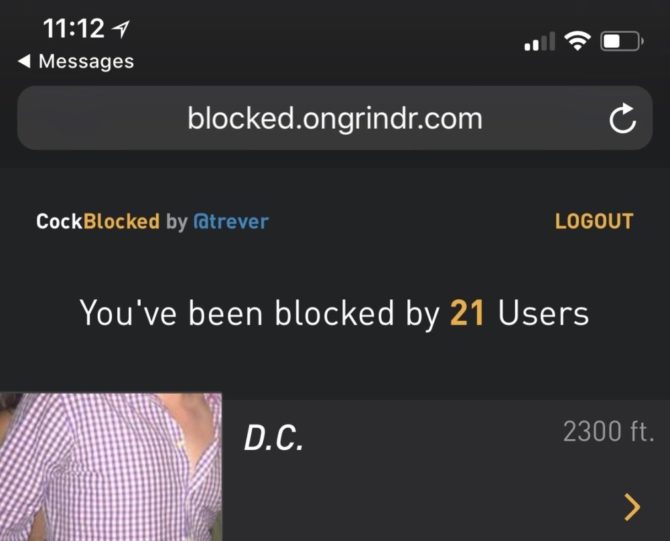 Introducing C*ckblocked, a new online tool that allows Grindr users to see everyone who has blocked them. It was developed by Trever Faden, a tech professional from Washington, D.C.

“About two weeks ago I discovered that Grindr actually gives each user the profile IDs of all the users who blocked you on the app,” Trever tells Queerty. “They don’t display it anywhere on the actual app itself, but the data is there.”

“So, I decided to build C*ckblocked,” he continues. “Basically you can login with your Grindr creds and it’ll show you all the users who blocked you on the app.”

C*ckblocked is free online tool that anyone with a Grindr profile can use. Trever says he created it over the course of one weekend and mainly for his own entertainment.

And, of course, because he was curious to see who had blocked him.

Related: This heartfelt Grindr review is the best thing you’ll read all week

“I’ve been surprised,” Trever says. “Some guys were completely random–why’d they block me!? (I’m looking at you Plaid Shirt-clad “D.C. Guy”!) Others were people I had spoken to in the past. I even saw a friend of mine on there! That was an odd conversation to have.”

While the whole thing is just for fun, Trever says, he doesn’t expect it will last for very long.

“I assume Grindr will shut it down within a week,” Trever says, “or patch the API I’m using so that it no longer displays the data, but I figure in the meantime, its interesting data that could spark some silly conversations.”

Which means, if you want to who’s blocked you, you better check C*ckblocked ASAP.

Luckily, someone finding out that you blocked them on Grindr isn’t a huge security vulnerability, as much as it is an awkward conversation waiting to happen. That said, when you block someone on Grindr, you do assume that information will stay somewhat private. Sometimes that is unfortunately just an assumption, as we’ve seen with data breaches in the past at companies like Ashley Madison. All of this data is safe, until it’s not, which, in my opinion, just means that if you really want to keep a secret–don’t send it through the internet.