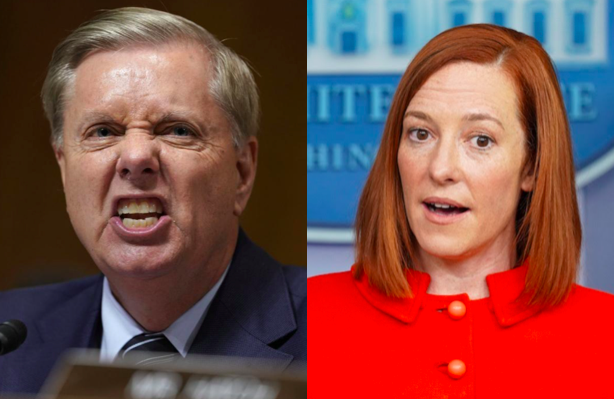 Conservatives are absolutely up in arms over an old tweet written by White House press secretary in Jen Psaki last summer that they say is homophobic.

The tweet in question was posted to Psaki’s personal Twitter page back in August and makes a reference to Senator Lindsey Graham, calling him the nickname “Lady G.”

“Only in 2020 does #LadyG get to push a bunch of debunked conspiracy theories while questioning @SallyQYates (aka an American hero),” Psaki wrote.

The nickname comes from a since-deleted Medium article published last year in which a male sex worker claimed to have engaged in a sexual relationship with the senator, who he called “Lady G.”

Since then, the hashtag #LadyG has trended numerous times and has been employed by countless Twitter users. Psaki is literally one of millions of others who have use it.

Of course, nobody’s more upset with her about it than conservatives…

Homophobia and intolerance from the Left is growing.

This should be widely condemned. @PressSec https://t.co/94GW0Xzaoq

So let's circle back to this homophobic tweet from @PressSec, who used a gay slur to trash Lindsey Graham.

Try not to be a bigot at your next job Jen.https://t.co/mydsEBZZyY

@PressSec The count down has begun to when you will be fired and you can go run for your HOA and spend the rest of your life making people take down their flags. Just when we thought things couldn’t get worse we got you!

If you want to know what a media double standard looks like, Jen Psaki, as a CNN employee, can tweet this, get hired to be a White House Press Secretary, and not even feel compelled to delete it after it was unsurfaced a few days ago. She doesn’t care. She’s on the same team. https://t.co/MDpadFLSSk

Did I miss the moment in the briefing when someone called Jen Psaki out on her apparently homophobic tweet? Can't believe Kayleigh McEnany would get the same treatment?

. @PressSec should apologize to the gay community. This is the type of demeaning language we should all be against. This isn’t partisan. @jrpsaki https://t.co/jbzhbuHp2N

We can’t help but note the irony of people who regularly attack LGBTQ people and actively fight against LGBTQ equality being suddenly concerned about homophobia.

We would also be remiss not to note the irony of these people being angry at Psaki over one tweet when their leader was Twitter Bully #1 and said far more egregious things before eventually having his account permanently suspended.

In a statement to Fox News, Graham’s office called Psaki’s tweet disappointing and said it was very telling of the type of person she is.

“Very disappointed someone in her position would embrace this style politics,” Kevin Bishop, a spokesman for Graham’s office, said. “It says more about her than it does about Senator Graham.”

Graham, of course, voted yes on a constitutional ban on same-sex marriage, voted yes on banning gay adoptions, and co-sponsored amending Constitution to define traditional marriage. He also holds a 0% rating with both the HRC and ACLU for his stances on gay rights and civil rights.

But, sure, Psaki’s the homophobe.