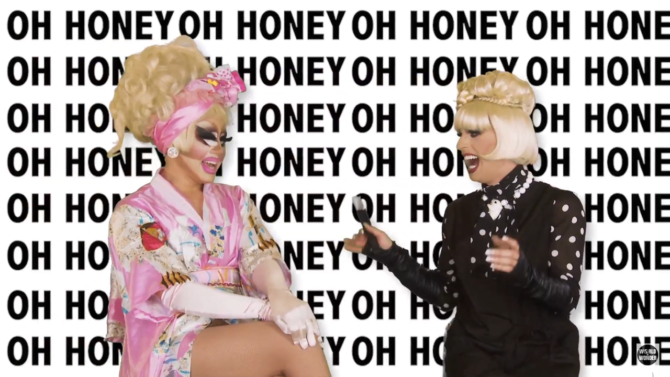 As any drag fan with mild insomnia can tell you, one of the very best ways to spend a restless night is watching episode after episode of UNHhhh, Katya and Trixie Mattel’s infectious web series, on your phone under the covers.

Well in a week mired in upsetting news and harsh realities, let us take pause and rejoice the fact that Viceland is bringing the duo together for an all new show, aptly named The Trixie & Katya Show.

The cable network of Vice Media just announced their new slate of programming, and we must say we’re a bit giddy that the insane (and insanely hilarious) chemistry between these two former RuPaul’s Drag Race contestants is being preserved.

If for some reason you are unfamiliar with UNHhhh, stop what you’re doing and check out a few episodes of its raw unbridled genius below…

…from this installment about “worst hookups”:

…to this episode titled “How’s your head?” that features some truly inspired use of green-screen technology:

The Trixie and Katya Show will premiere on November 1st, and will be produced by World of Wonder (with RuPaul as one of the executive producers), the production company that gave us UNHhhh.

We’re desperately hoping they bring over whoever is in charge of editing the crazed series, because that person deserves an Emmy and probably a xanax prescription.

Also NBD: Entertainment Weekly included UNHhhh in its recent “The Must List.”

These girls are ready to break through.