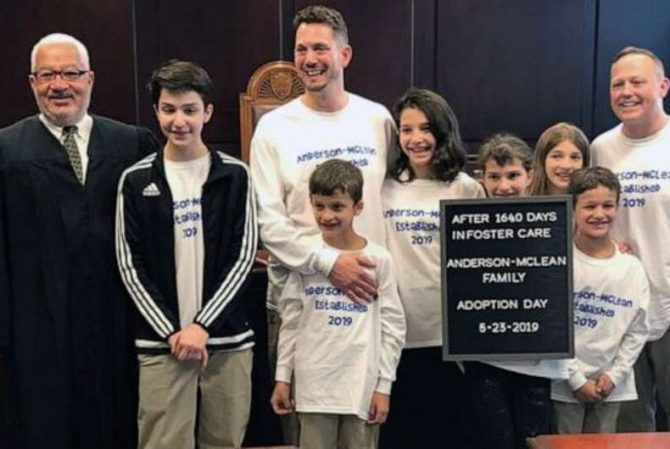 Pittsburgh couple Rob and Steve Anderson-McLean have just become the proud dads of six siblings they adopted in a Pensylvania court.

Carlos, 14, Guadalupe, 13, Maria, 12, Selena, 10, Nasa, 9, and Max, 7, had spent five years in foster care before landing in the home of Rob & Steve. The couple discovered the six siblings last year, and knew they had found their kids.

“We saw their picture and fell in love,” said Rob. “So many sibling groups are broken up because people just want to adopt the younger children. Steve and I knew these guys needed to be together.”

The siblings moved in with the couple in July 2018, and quickly fell in love with their new home. That came as something of a relief for Steve & Rob, who worried about how the kids might adjust to having a same-sex couple as parents. “We thought with Carlos being a teen, he might have a hard time, but it has not bothered him one bit,” Steve says.

As for the kids, they love their new home with their official dads. “I’m not a foster kid anymore,” Carlos recently said to Steve. “I don’t have to carry that title around. I finally have a real family.”

Young Max was a bit more direct with his feelings. “The other night, Max, our 7-year-old, looks at me and goes, ‘I’m adopted,'” Steve says. “I nodded and he said, ‘You can’t get unadopted right?’ And I had to reassure him that he will always be our son.”

Frankly, this is the kind of parenting that someone like Straight Pride mom Mylinda Mason should take note of. It’s what love really looks like.