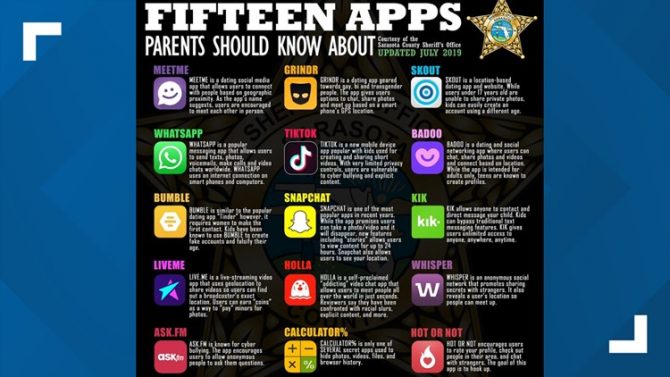 Police in Madill, Oklahoma have begun circulating a list of what they say are the 15 most dangerous apps for children, and among them are Snapchat, WhatsApp, and… Grindr.

“GRINDR is dating app geared toward the gay, bi, and transgender people,” the infographic, which was posted to social media this week, warns. “The app gives users options to chat, share photos and meet up based on a smart phone’s GPS location.”

Police created the list in response to growing concerns about online predators and human trafficking. They’re encouraging parents to check their children’s phones to see if they’ve downloaded any of them.

“We found in our review of these apps is a lot of predators… use them to endanger kids,” says police spokesperson Donny Raley. “We want parents to be aware of what the possibilities are.”

With school just around the corner, we wanted to share with Parents, 15 Apps you should be aware of on your child's phone/tablet .. and the dangers that come with some of them.

The list also includes a few other random dating apps, including Bumble, Skout, and Hot or Not, all of which they say “kids can easily create an account with a different age.”

“We wanted to be proactive with this,” Raley says. “We wanted to make sure we got a head of it and let parents know to check their kids’ phones or their tablets to see what they’re involved in.”

The added bonus, of course, is that if parents find Grindr on their kid’s phone, they’ll also discover that their child is gay since it’s the only app on this list that specifically mentions sexual orientation.

Obviously, kids have no business being on Grindr, and it’s important to keep them safe from online predators. But why police felt the need to specifically state that it’s an app for gay people, and why it was placed smack dab in the top center of the infographic, seems a little fishy.

Then again, Grindr is pretty toxic and tends to bring out the worst in people. So maybe the cops are doing future generations of adult gay men a favor by steering them away from it early?

What do you think? Sound off in the comments section below…