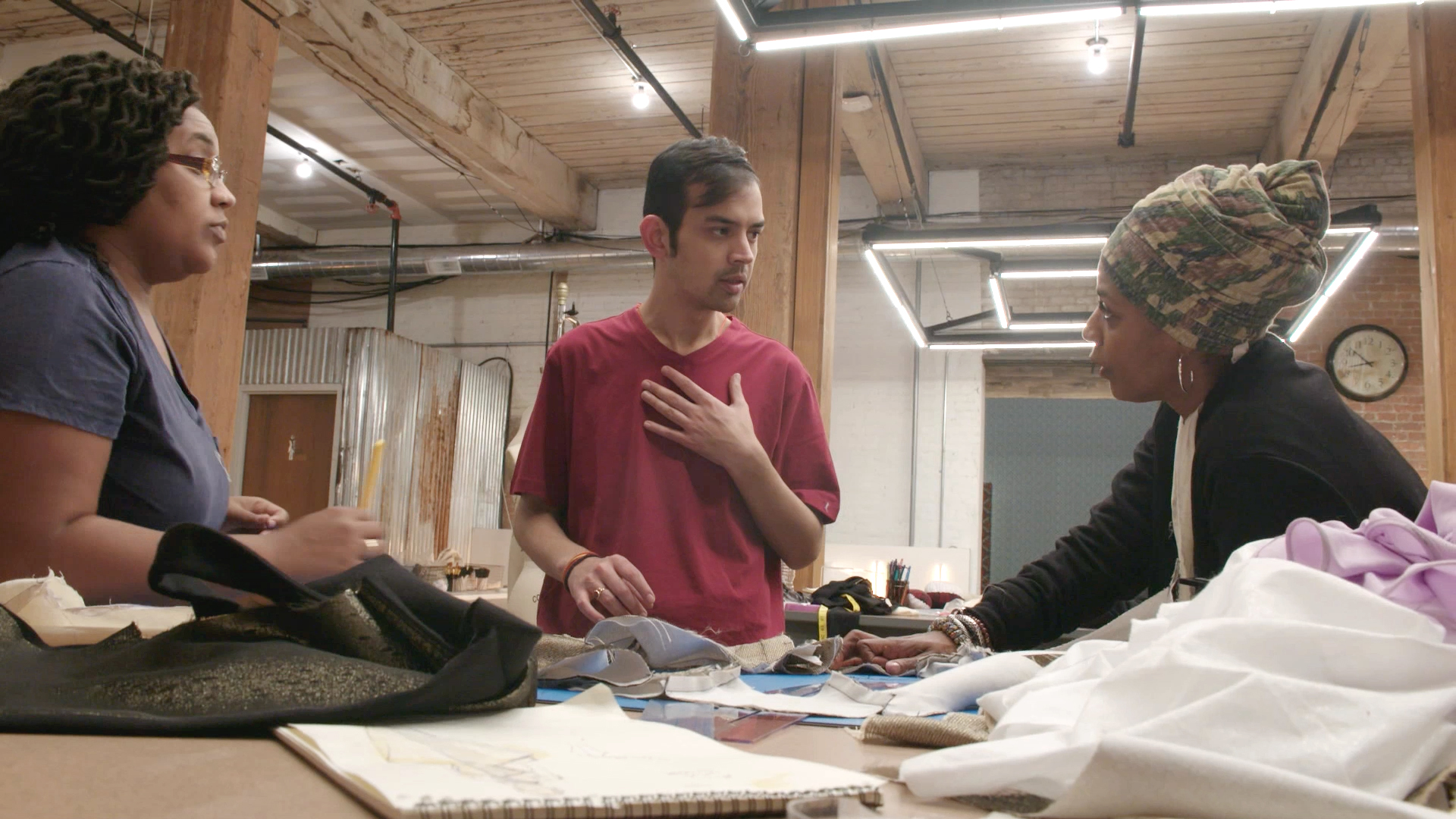 Born in a Himalayan village, he grew up moving around different states in India, always fascinated by beauty and fashion. He began studying design at the prestigious National Institute of Fashion Technology, Hyderabad. From there, he moved to the United States, along with his boyfriend, to study at the Academy of Art University in San Francisco.

Kapoor took a few minutes to chat with Queerty about his ambitions and his newfound celebrity. Project Runway airs Thursdays on Bravo and streams on Lifetime & Hulu.

So you’re having a heck of a run. How are you feeling about the whole Project Runway experience?

Oh my God, it’s incredible. From Day One, all the way to the end, I am feeling all the positive vibes, the positive energy. I am so, so thankful for Project Runway to have given me the platform to, you know, express myself and showcase myself, and showcase my talent. I’m just getting all the good energies right now.

Terrific. What’s surprised you the most so far?

I think, going into this, I had a big misconception about what reality television shows are supposed to be like. I thought it would be tacky and a little oppressive.

Being in the show, I found out that that’s not true. They’re invested to know who you are as a human being, and they just give you a very authentic expression of who you are. So Project Runway, Bravo, has literally helped me get rid of that misconception about reality television shows. And I’m like, so, so glad for that. I’m very, very thankful.

And you’ve developed a huge fanbase already. People are calling you the big breakout character this season…

I don’t know if you’re aware of this, but they say you’re the big breakout.

[His voice quivers, audibly weeping. He pauses a beat.]

I just got really emotional thinking about it. It makes me incredibly happy.

Your biography is amazing. I think you’re only the second Indian designer to ever appear on the show. Is that a big responsibility?

It’s a huge responsibility because I think, you know, every time a contestant comes from a different country, I always feel like I have this platform, and I want to share the issues that are all around the world happening to people. So yes, I feel like it’s a huge responsibility, and I hope I deliver it well. I really wanted everybody to know that there are places in the world where oppression is still a thing. In my country, anti-gay law Section 377 was taken off [the books] on September 6, 2018.

And we still have a long way to go in terms of cultural acceptance for LGBTQ people and assimilating them into a normal workspace. Just integrating them into normal life. I feel like in that sense if I don’t say anything, if I don’t represent that, I feel like I’m not being true to myself. I’m not being honest with myself. I just want to be sure that I represent my nation, but I also tell people or just have a conversation about what’s going on back home. And I think that I am able to do that.

I know you came out when you were still living in India. How old were you?

I was probably 20, 21. I had just turned 21 and me and my boyfriend were living together. We were doing all these things together. We were participating members of the community. I had a job. So did he. There was no reason for us to be perceived as something harmful to society. However, [we had] an incident of the police being called on us, and it just changed my perception of how society is perceiving me. Before that, [I knew I had to be] quiet about some of these things. But when that happened, I honestly felt like I wanted freedom. I just wanted to find a place where I could be authentically myself.

But over the years, I think my boyfriend and I have seen so many struggles together. So I feel like our relationship has grown very, very strong because of that.

How did you meet your boyfriend?

We were 20 and there was an underground gay website…

It’s kind of a staple for gay people all over the world.

Your designs have a fusion aesthetic of sorts, combining traditional Indian and Tibetan style with Western designs. How do you find the right balance?

I think, with me, I feel there’s no formula. The idea is to kind of get a tactile expression of otherwise abstract emotions. When I’m designing, I’m just feeling something. I have a mental image, and I have references. This latest collection of what I’m working on is just me driving with my mom through the Himalayas, looking at the spring flowers. You know that beautiful feeling when spring is back? When the goddess of spring has the flowers blooming? It’s just trying to invite that feeling into your clothes. Because I’ve been studying fashion for so long, I feel like sometimes we tend to get extremely technical with our art.

You’ve been taught the color story, you’ve been taught construction. I always try to push the conventions. It should always usher in a different kind of mood. So, as a designer, that’s what I want. It just comes from narratives. With my designs, I want to celebrate women. With so much cultural oppression, I feel like women in my country fight this. And we have had incredible women who’ve just fought the culture of hate to maximize gains and just risen up. I feel like my designs celebrate those things. There are so many incredible women in history we can get inspired from, and their ideologies we can incorporate into our designs. That’s where all the creative references are coming from. What they say is more important than a visual reference for me because that makes me start feeling. That prepares the entire idea.

You’ve also said your feminine clothes are like armor for a model. What elements do you integrate to a design that intimate that feeling?

I specialize in jackets because jackets are something that always reminds me of armor. It shields you from everything out there. A good jacket is going to stay with you forever. That’s one element. Apart from that I’m always thinking, “Let’s break the silhouette of something” and try to push it. So every time I look at a human body, I’m trying to look at another kind of shape and combine it with a certain sense of functionality. For example, the reference would be in Episode 3, the post-apocalyptic look. That’s one thing that I really, really enjoyed doing. It’s also an expression of me as a person because I feel like I have a niche, but I can’t be encapsulated. It’s a very good example of what I try to do: Think about the body in a completely different way. I also try to make sure that my garments are empowering to women. You’ll always see me pushing the limits of the silhouette because to be smart, to be function, to be able to go out there and do her thing is so much more crucial than, “This is just pretty.” So I try to give that to my designs.

Where do you find your inspiration?

Everything. Life puts me in a creative mood. It’s everywhere. I just take all my emotions and express them in my designs.

What are your plans career-wise after the show?

So I have my collection that I’m going to draw by the end of this month. I’m so excited about it. It’s going to be available at Kovid-Koo.com. I have a soft, secret installation art project which is going to be out in the middle of the year. At the same time, we are getting in touch with tailors and online luxury retailers so we can get our products more available to more people.