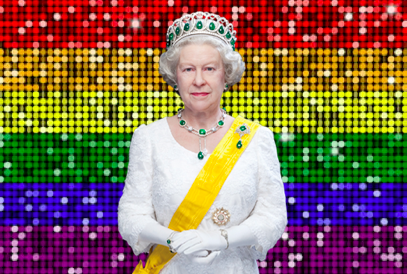 Last week, it was revealed that Queen Elizabeth’s favorite song is “Dancing Queen” by ABBA.

According to sources, at a recent dinner party, the song came on and Her Majesty loudly sated: “I always try to dance when this song comes on, because I am the Queen, and I like to dance.”

Now, even more big reveals are being made about the 91-year-old monarch, including that she breakfasts on the high fiber weight loss cereal Special K and is woken up each morning at 9am sharp by the Piper to the Sovereign, who plays for 15 minutes.

But perhaps the most interesting new revelation is her favorite TV show. According to sources, the Queen never misses an episode of a reality show fronted by a famous gay man.

The show is called Coach Trip and the famous gay man is 58-year-old host Brendan Sheerin, who claims the Queen is a big fan of his.

Coach Trip is a popular British reality game show broadcast on Channel 4. Contestants ride around on a bus with Sheerin, who acts as the tour guide. They participate in activities like trekking through mud baths, riding mechanical bulls, and jumping into freezing cold water. At the end of each episode, they vote for someone to be removed from the bus. The last remaining contestant gets a prize.

Apparently the Queen just loves the show and on evenings when she can’t watch, she has it recorded so she can catch up at a later time.

“It makes me so proud as I love the Queen,” Brendan tells The Sun. “I think she’s an amazing lady, especially all the good things she’s done for this country.”