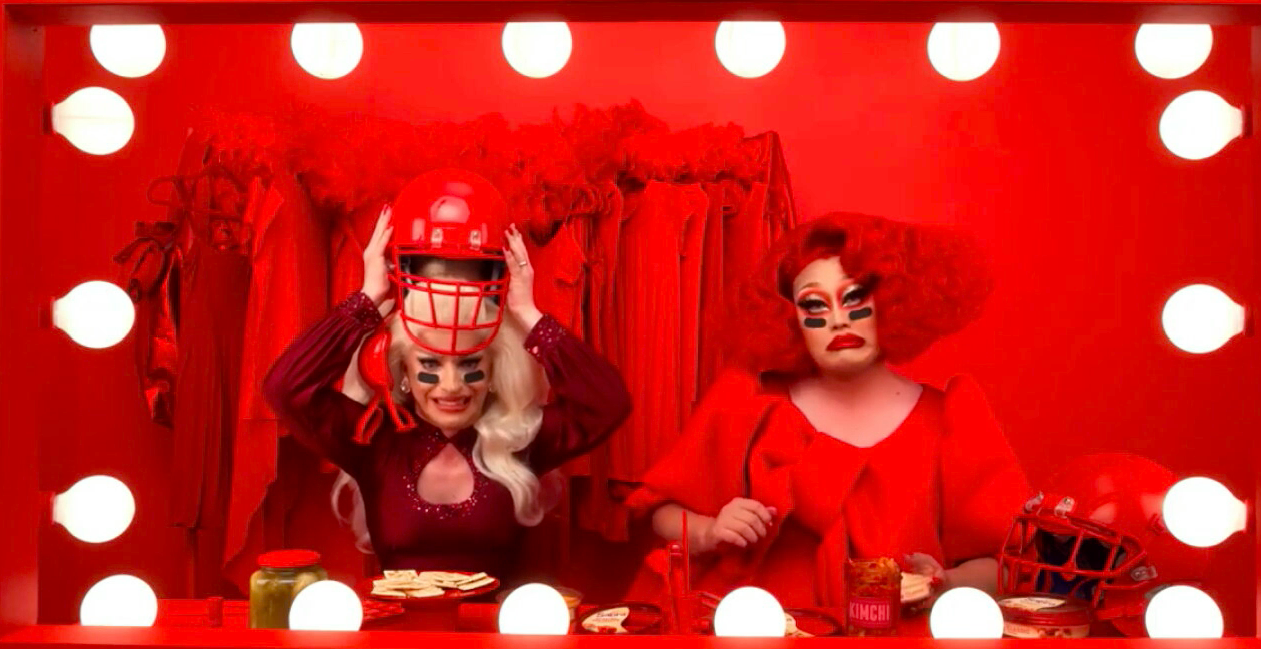 The Super Bowl always delivers queer ads nowadays, and this year is going to be one of the busiest, chock full of LGBT celebrities.

Once again setting a record, a 30-second commercial in Super Bowl LIV–pitting the San Francisco 49ers versus the Kansas City Chiefs–will cost marketers a cool $5.6 million on Fox (including dueling 60-second spots from the Trump and Bloomberg presidential campaigns). In our increasingly atomized world, the Super Bowl is one of the few programs that brings audiences together across boundaries, from queers watching it a gay sports bar in the Castro to Christian conservatives in rural Alabama.

So whether you tune in for the tight ends, the performances by Jennifer Lopez and Shakira, or the commercials, don’t forget to look out for these queer ads watched by 100 million other viewers.

We rounded up a few for your previewing pleasure…

Super Bowl veteran advertiser Doritos serves up a spot featuring queer breakout musician Lil Nas X, reprising his role as a cowboy from his hit video for “Old Town Road.” The 20-year-old rapper approaches the country Western town called The Cool Ranch — get it? Then there’s a showdown dance off with Sam Elliott, also playing a cowboy, for a bag of the chips. Elliott’s trademark mustache pulls a trick move but it ends when Lil Was X’s horse dances too, as Elliott’s horse says no way. Billy Ray Cyrus (from the original video for “Old Town Road”) makes a cameo at the end and says, “I ain’t dancin’.”

“Time for this snack to get a snack,” says sassy “Queer Eye” star Jonathan Van Ness in the teaser. Not happy with the choices backstage, he lists the things wrong with the choices, “So dry, so dull, so crusty — someone needs to fix this!!” He closes the spot with a moment of awareness, and says to viewers, “So sorry.”

The full version shows that Pop-Tarts “fixed” the pretzel.

The two chat while facing a “mirror,” everything in red. Miz Cracker tries to put on a red football helmet over her giant, blonde wig and says without irony, “I hope this doesn’t give me helmet hair.” The tagline: “Dip’s about to get real.”

If that’s not camp enough, they also made one including Caroline Manzo and Teresa Giudice, rivals from 2009’s “Real Housewives of New Jersey.”

Newlyweds Ali Krieger and Ashlyn Harris are 2019 World Cup winners for the U.S. Women’s National Team. They react to the commercial that they’re in but we don’t yet get to see until the Big Game. They are one of several stories Budweiser will unveil.

Bisexual talk show host Lilly Sing (NBC’s “A Little Late with Lilly Singh”) joins actress Busy Phillips and retired astronaut Nicole Stott, about to launch into space as astronauts. Suited up and carrying space helmets, Phillips asks, “Who has the keys?” and Singh replies, “I don’t know, I thought you did!” Katie Couric also appears as a journalist covering the event.

Other versions have Busy and Lilly already in space, discovering astronaut food and dry skin.

Ellen DeGeneres has been sending up Alexa for years on “The Ellen Show,” and now she’s in two teaser spots with her wife Portia de Rossi for the Echo smart home speaker from Amazon.

In one spot, the old couple lightly bicker about the right temperature for the room.

In another teaser with Ellen and her wife, Portia spills a glass of wine. Ellen rushes over to “help” by telling Alexa to add wine to the shopping list. The wine remains on the counter. They wonder, “What did people do before Alexa?”

Transgender actresses Trace Lysette (“Transparent”) and Isis King (“When They See Us”) are included in this catchy  tax-dance commercial.

If history is any guide, these won’t be the only queer spots in the Big Game. See how many you can spot!