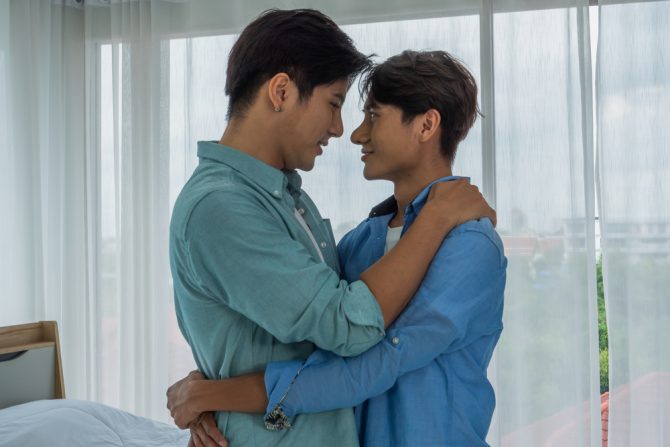 He thought dancing was just romantic in the movies, he says. He was wrong.

In a recent Reddit post, a guy says he’s a slow-dancing convert after he and his boyfriend had a picture-perfect moment in the kitchen:

So, as usual, I stayed at my man’s apartment on Tuesday night and stayed until Wednesday night, since he had no classes, and I crave for some hugs. Unfortunately, we are both busy and end up spending the entire day doing work. By the night, we are both too exhausted to cook, so we just cooked ramen and ordered the side dishes online.

So, while waiting for the food, I played music on my Spotify. Taylor Swift’s “Lover” played on it, and he was like, “I love that song,” and pulled me to the kitchen.

The next thing I knew, we are both slowly dancing to the song. He put my hands on his nape, and we slowly circled around. Our eyes locked on each other; his eyes were projecting unrestrained joy. We’re both bad at dancing, but who cares if our movements aren’t synchronized? I loved the moment he pulled me close and enclosed me in his arms. His warmth defied the coldness I was feeling on my soles while we’re dancing barefoot against the cold tiles.

Man, I was so in love with him that this corny moment made me feel so crazy. Earlier, while I was preparing my dinner, I was imagining myself dancing with him again. I wanna do it one more time.

“Happy to read that,” a commenter wrote. “Keep the love flame burning.”

Another user wrote: “It sounds so romantic and lovely. I wanna experience that someday with my future man!”

A third commenter, meanwhile, said he never understood the appeal of slow-dancing with girls. “Seemed so awkward and pointless and couldn’t wait for the song to end,” he said. “But after coming out and dancing with a guy… wow!”

And one Redditor shared an equally swoon-worthy story that his grandparents’ next-door neighbor told him after both grandparents passed away: “She said that her kitchen faces my grandparents’ kitchen, and every night for 50 years after dinner my grandparents would slow-dance together in the kitchen. It’s a beautiful thing.”