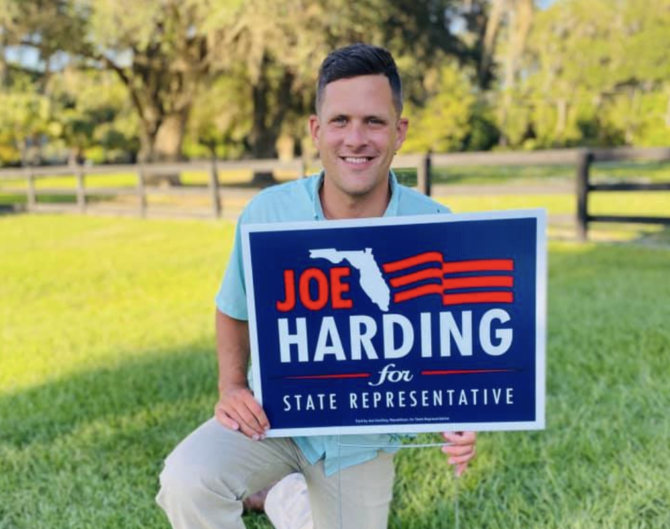 He’s the Florida State Representative who proposed an amendment to the state’s “Don’t Say Gay” bill that would force teachers to out their students by notifying parents within six weeks of learning about their child’s LGBTQ identity.

After introducing the draconian amendment on Monday, Harding withdrew it on Tuesday, following heavy pushback from Democrats, LGTBQ advocates, and people with basic common decency who don’t want to see children potentially put in danger.

In a video posted to Twitter earlier this month, Harding defended the homophobic bill as a way to “empower parents” and keep kids from talking about sexual orientation.

The president and his team decided to distort the truth and outright lie about my bill that empowers parents. Here is my response. ?@POTUS? ?@PressSec? pic.twitter.com/Huo0RNNxBE

So, what else do we know about this asshole (aside from the fact that he’s a raging homophobe, that is)?

Well, prior to being elected to the Florida House of Representatives in November 2020, the 34-year-old married father of four was a college dropout who worked in construction. Nothing wrong with either of those things, of course, but it’s a shame he didn’t finish his education because it might have helped open his mind a little more.

According to iVoterGuide, in addition to hating LGBTQ people, Harding is a huge supporter of homophobic “religious freedom” laws and believes separation of church and State means, in his words, “the State staying out of the church’s business and not the other way around.”

He also opposes same-sex marriage, going so far as to say marriage should be legally defined as “between one man and one woman”, and he doesn’t believe sexual orientation, gender identity, or gender expression should be included as protected classes in non-discrimination laws.

“I am a born again Christian and my faith lays the foundation for the decisions I make,” he’s reported as saying. “I believe right and wrong is defined by the bible. God’s word is a wealth of wisdom and answers to all of our current issues can be found in his word!”

Florida House Republicans voted to advance the “Don’t Say Gay” bill on Tuesday. It is now set for a final vote in the House later today. Only one Republican, Rep. Chip LaMarca, plans to vote against it.

LaMarca’s district lies in Broward County, the second-most populous county in the state with a very large LGBTQ population. Unfortunately, Republicans have 78 votes in the Florida House, compared to Democrats, who have just 41, so the loss of LaMarca’s support will likely have no impact on whether the bill passes.