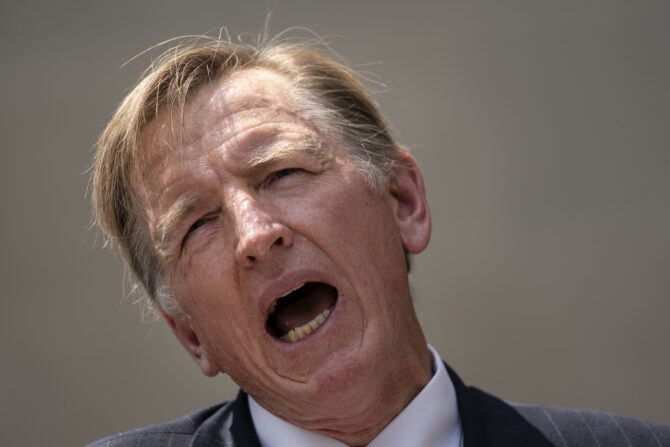 Republican Rep. Paul Gosar succeeded in finding the worst possible response to Tuesday’s horrific elementary school shooting, and now folks are calling on him to resign.

Gosar took to Twitter to spread a completely baseless rumor that the gunman who killed at least 19 children and two adults at Robb Elementary School in Uvalde, Texas, was a trans, “leftist illegal alien.” At the time of his tweet, the shooter had already been confirmed to be 18-year-old Salvadore Rolando Ramos, a cisgender male.

While the vile tweet was later deleted, the lie continues to spread across Twitter and Reddit, with some users dangerously sharing images of innocent trans people and claiming they are Ramos.

Related: Tomi Lahren said something stupid about yesterday’s school shooting and Twitter is NOT having it

Redditor Apprehensive_Ad_995 is one of the falsely accused trans people; she took to the online forum to assure everyone, “It’s not me, I don’t even live in Texas.”

Other users across Twitter have been fighting the misinformation:

Many are posting photos of a young male in women’s clothing claiming it is the #Uvalde, Texas mass shooter. Those images are unconfirmed & unverified. Please stop sharing them because in the event they aren’t Ramos, you’re harming someone who had nothing to do with the shooting.

Needless to say, people are more than a bit pissed about Gosar’s comments, with many calling on him to resign:

Raise your hand if you think Paul Gosar should resign.

Paul Gosar needs to resign and…

Oh who am I kidding. We're in the post-accountability age for everything and the GOP will do nothing.

It's hatemongers like @RepGosar that make me afraid for my partner's life, for our family, for our community. Resign, Gosar. You're not deserving of the office you hold. https://t.co/p0mkdCQkVG

@RepGosar you are sick and need to resign.

Gosar has not apologized or even publicly acknowledged the wildly offensive tweet.

He did, however, take a moment to congratulate his pal Marjorie Taylor Greene on winning her primary election.