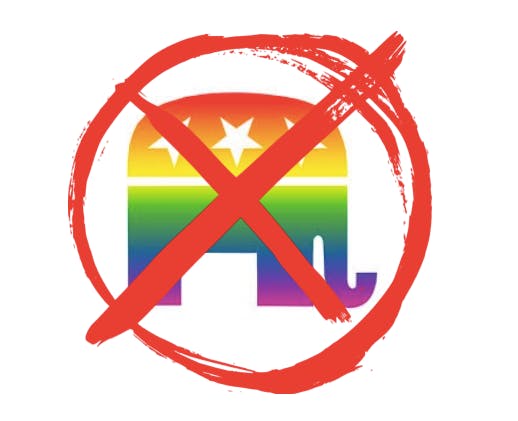 With the Republican National Convention approaching–albeit in abbreviated form due to COVID-19–the party has announced its 2020 platform will feature renewed opposition to marriage equality, LGBTQ rights, and will endorse conversion therapy.

The New York Times reports that the tone-deaf announcement–which comes during pride month and during renewed queer activism in solidarity with Black Lives Matter–is a move to repackage the party’s 2016 platform as new, rather than adopting fresh positions. The move also comes at a time when the RNC has tried to promote Trump as the most pro-queer President in history.

The repackaging results from a boneheaded move by President Trump to move the party convention out of Charlotte, North Carolina, and to appoint his son-in-law Jared Kushner as the author of a new platform. The latter move infuriated Republican delegates. COVID-19 will prevent the party from resolving the issues during the convention itself; over health and safety concerns the 5,000 delegates will not be allowed to convene in full during the convention.

The Times reports “The 2016 platform that is being renewed was the result of messy debates in Cleveland, the host city of the Republican convention four years ago, during which a group of renegade delegates tried but failed to strip out language opposing gay marriage and condoning conversion therapy for L.G.B.T.Q. youths.”

“The platform made a steadfast case against same-sex marriage and called for a constitutional amendment overturning the 2015 Supreme Court decision that struck down laws defining marriage between one man and one woman,” the Times also notes. “And it blames ‘the current President’ for seeking to expand workplace protections to include L.G.B.T.Q. people.”

That last bit also hits on another head-scratching issue: the platform contains numerous references deriding “the current President;” another hold-over from 2016 when Barack Obama still occupied the White House. With Trump seeking re-election, the party appears to attack its own candidate.

On the other hand, chastising the current President is something a large swath of Americans already had in mind…