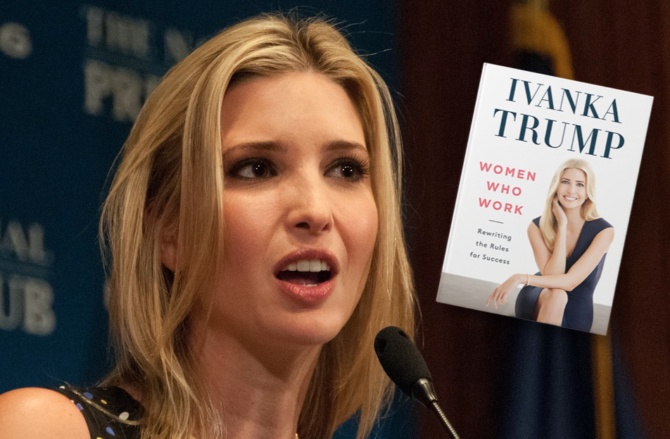 Her book, Women Who Work: Rewriting the Rules for Success, went on sale Tuesday, and the reviews have hit like a piano dropping from a tenth story window. She previously stated that her intentions behind the book are to “inspire you to redefine success and architect a life that honors your individual passions and priorities.”

The critics have a slightly different take on her self-help drivel.

Self-actualization is the all-consuming preoccupation of “Women Who Work.” In this way, the book is not really offensive so much as witlessly derivative, endlessly recapitulating the wisdom of other, canonical self-help and business books — by Stephen Covey, Simon Sinek, Shawn Achor, Adam Grant. (Profiting handsomely off the hard work of others appears to be a signature Trumpian trait.) For a while, it reads like the best valedictorian speech ever.

The book […] reads like a mashup of countless essays and articles written in the past decade aimed at female entrepreneurs.

That isn’t to say all the advice is bad — it’s just that little is new. The book borrows heavily from books like Sheryl Sandberg’s “Lean In,” Joanna Barsh and Susie Cranston’s “How Remarkable Women Lead,” and backlogs of IvankaTrump.com.

Often, the melange of quotes and how-to lists give the book more the aesthetic of a Pinterest board than a career guide.

Related: Ivanka’s book should be called “Women Who Work… In My Sweatshop For $1 An Hour”

And Beth Teitell of the Boston Globe is particularly shady:

Ivanka’s life seems pretty smooth, but in her book she reveals struggles, like the time Anna Wintour heard that she was about to graduate from college and called out of the blue with a job offer, a challenge familiar to many aspiring writers.

Mashable’s Chris Taylor went right for the jugular in his review, titled “We read Ivanka Trump’s insufferable new book so you don’t have to”:

Here is proof that a female CEO can write a business book that is just as bad — just as padded with bromides and widely-known examples and self-promotion and unexamined privilege and jargon — as one written by an overconfident male CEO.

All things considered, she may not want to quit her day job.

Wait… what is her day job?!