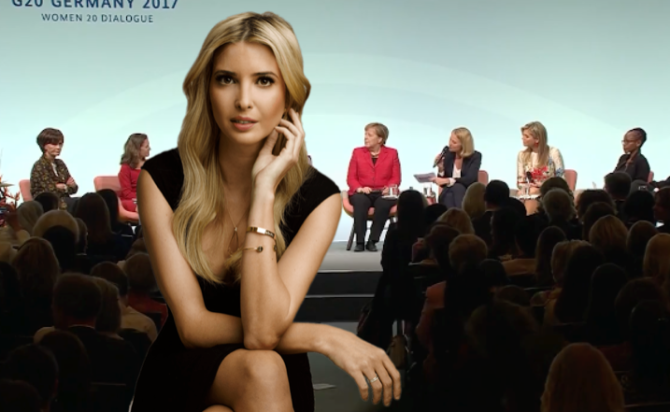 So Ivanka Trump walks into an international women’s summit and praises her dad as a “tremendous champion” of families.

No, that’s not the setup to a bad joke, that’s just what really happened.

Needless to say, it did not go over well — boos and hisses spread out from the crowd in attendance.

And that’s nothing compared to what happened next on Twitter.

Scroll down to see what people have to say about Donald Trump, “tremendous champion” of families:

Ivanka Trump showered in boos at W20 after praising her dad as a ‘tremendous champion’ of families. He loves families so much he has had 3.

Ivanka Trump was booed in Berlin.
It's amazing how, only 72 years after WW2, Germany has to call out American demagogues.

Ivanka Trump went to a women's empowerment summit and defended her father, not women.

Ivanka Trump is part of this administration, so she has to bear the full brunt of public opinion. She's not just the president's daughter.

Shoutout to Germany & the international community for vigorously booing Ivanka Trump & her fake brand of feminism.

Is anyone else not happy that Ivanka Trump speaks on behalf of women in Germany? #Ivankatrump I am glad they hissed/booed

The looks on the at the G20 conf attendees after "Ivanka Trump" said her father champions women?????? pic.twitter.com/PnRDuIhVjQ

There's not a genuine bone in Ivanka Trump's body.

SHAME on Ivanka Trump to lie for daddy. Not SURPRISED though! Flynn is lying, too! #TuesdayMotivation #TheResistance #april25th #Impeach45 pic.twitter.com/Q7loGg9IqX