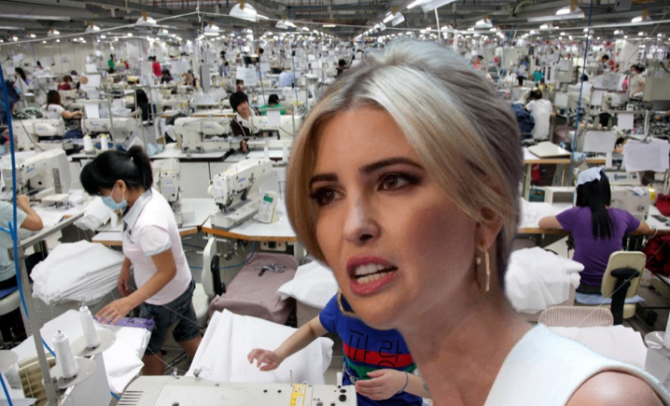 First daughter and uncomfortably ambiguous advisor to the president Ivanka Trump is a vocal supporter of her father’s “buy American, hire American” initiative, but she’s now having to answer for a damning report of labor violations at the Chinese factory that produces her clothing line.

The Washington Post reports that dozens of violations of international labor standards have been cited in an audit of the factory, which is owned by the G-III Apparel Group. The company owns the exclusive rights to manufacture and distribute Ivanka’s fashions.

The Post makes note that the inspectors’ report, “comes as the president’s daughter has sought to cast herself as both a champion of workplace issues and a defender of her father’s ‘buy American, hire American’ agenda.”

To add to the farce, Ivanka has also just released a book called Women Who Work.

“We can add billions to the global economy by creating an enabling environment, increasing women’s labour force participation and business ownership, and improving the productivity of their work,” Trump wrote in a Financial Times essay Monday.

Workers at the G-III factory were expected to work 57-hour weeks “on a regular basis” to achieve production targets, exceeding Chinese laws that limit overtime.

And Ivanka’s brand is all about productivity. For factory employees’ hard work, workers were paid between 1,879 and 2,088 yuan per month — about $255 to $283 — coming in at below minimum wage in some parts of China.

On top of that, the factory fell short on its obligations to provide “social insurance” benefits as well as housing assistance.

Then there were the safety concerns — the factory failed to properly train workers, putting theme at serious risk of injury.

Earlier this week, Ivanka was booed by a crowd after making the assertion that her father is a “tremendous champion of women.”

It looks like the apple doesn’t fall far from the orange.