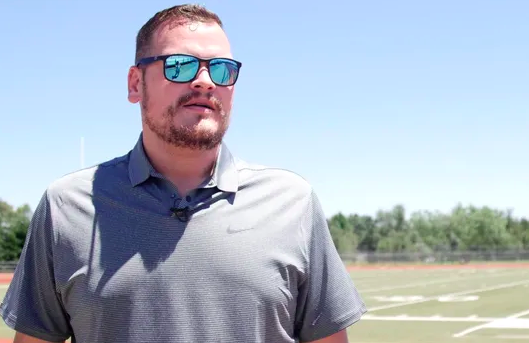 Ryan O’Callaghan is one of only a handful of openly gay former NFL players. Eight years after retiring, he’s opening up about his time in the sport and how it “damn near killed” him.

In 2006, O’Callaghan was drafted as a right tackle for the New England Patriots. In 2009, he was picked up by the Kansas City Chiefs, where he played for two seasons. But by 2011, his addictions, injuries, and the stress of being closeted became too much to bear and he left the sport.

In his new memoir, “My Life on the Line: How the NFL Damn Near Killed Me, and Ended Up Saving My Life,” 36-year-old O’Callaghan, who came out publicly in 2017, speaks very candidly about the lasting impact being closeted in the NFL had on him.

O’Callaghan, who grew up in the conservative down of Redding, California, writes that he could “never exist as a gay man” and be fully accepted by his family and friends.

“I needed a beard to live,” he writes.

As he moved up in the NFL ranks, O’Callaghan mostly kept to himself and kept his sexuality a closely-guarded secret from the other players.

“Hearing ‘fag’ in the locker room wasn’t what made me feel like an outcast in my own sport,” he writes in the book. “Instead, what was a daily reminder that I was different from the rest of the guys was the constant conversation in the locker room about women.”

Eventually, he writes, the burden of constantly trying to pass as straight became “exhausting” and led him down a road of addiction that ultimately caused him to leave the sport.

Since retiring in 2011, O’Callaghan says he doesn’t think much has changed inside the organization.

“They haven’t had anyone else come out,” he says. “I met with NFL commissioner Roger Goodell and he’s asked me what he can do to help. And it’s tough because he has to answer to 32 owners and the NFL has a huge influence on American society as a whole. He has to be careful not to be seen as an activist and alienate fans.”

“I started my foundation to give solace and support to LGBT college athletes, support meaning mentorship, events and creating a sense of community with other out athletes,” he tells the Washington Blade, adding that he hopes to be “a mentor for the next generation.”

“My Life on the Line: How the NFL Damn Near Killed Me, and Ended Up Saving My Life” will be released on September 3.