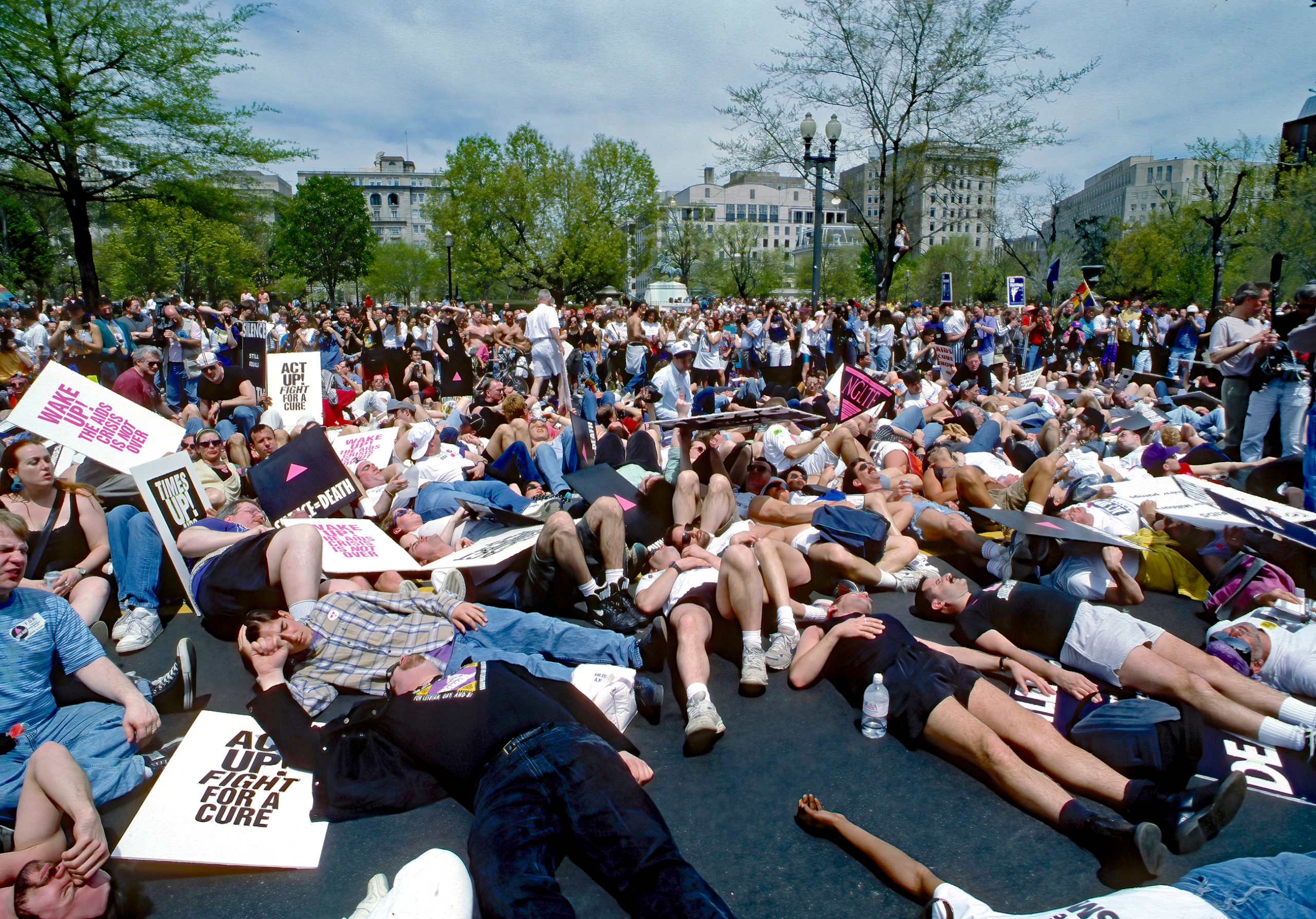 Act Up, Fight Back, Fight AIDS!

This chant rang out across the U.S. at the depths of the AIDS crisis, when the activist group ACT UP brought the LGBTQ community and its allies together to fight for their lives.

Today, for many people, ACT UP exists mostly in stock images of street protests: angry gay men getting arrested while challenging government, religion, and the medical establishment for their failure to deal with AIDS. Flashy fictionalized versions of the group have appeared on “Pose” and “It’s a Sin,” but what was ACT UP actually all about?

Sarah Schulman wrote Let the Record Show: A Political History of ACT UP New York, 1987–1993 to tell the fullest possible story of ACT UP (AIDS Coalition to Unleash Power) by conducting interviews with 188 members. She did this, she says, because the story of AIDS activism was being obscured and re-historicized as just a few brave (mostly white male) individuals, rather than the huge communal effort ACT UP really was.

Sarah calls this obscuring of our collective history “a state of emergency.” Her book is a synthesis of the diverse communities, personalities, and strategies that intersected to create a staggering amount of change in a brief period of time.

I’ve known Sarah since we both joined ACT UP. I was fresh out of college; she was already an accomplished novelist and reporter for queer media. Over the next four years, I chanted and got arrested for civil disobedience, but also worked in committees, attended teach-ins, facilitated meetings, made some of the best friends of my life, and lost some of the best people I’ve ever known, all while my young political mind was split open, my privilege examined, and my worldview transformed for good.

We spoke at length by phone; what follows are the highlights of that conversation.

What I’d love for you to answer first is: Why did you collect these interviews?

In the first five years of AIDS, 40,000 people died, and the government did nothing, and pharma basically tried to recycle failed cancer drugs that they held the patents for. What the gay community did in those first years was try to replicate social services that we were deprived of, because not only did gay people have no rights –like if your partner died of AIDS, you couldn’t inherit the lease – but also familial homophobia was pervasive, a lot of People with AIDS had no family support whatsoever. All of these social services were founded – people would walk your dog, or somebody would be your buddy and do your grocery shopping – but there was no political response.

In March of 1987, Larry Kramer, the writer (The Normal Heart), gave a speech at the Gay and Lesbian Center, and the audience members decided that they wanted to start a political group. A few days later they met, and they founded ACT UP.

ACT UP achieved incredible victories, I mean it’s very hard to find another movement of people so outside of power that was able to accomplish so much. Just to hit the high points: ACT UP basically forced pharma to restructure the way that they researched medications; ACT UP forced the Food and Drug Administration to make experimental drugs available, even if they hadn’t been approved; ACT UP forced the CDC to change the definition of AIDS, so that women with AIDS could qualify for benefits and experimental drug trials; ACT UP made needle exchange legal in New York City; ACT UP stopped the Catholic Church from inhibiting condom distribution in the public schools; and ACT UP started Housing Works, a program for homeless people with AIDS. ACT UP achieved reform in private insurance that made 500,000 people with HIV eligible for insurance and ACT UP changed the way that gay people and People with AIDS saw themselves and were seen in mass media. And that’s phenomenal.

None of ACT UP’s materials were digitized. So as everyone started going online, if you searched ACT UP, you wouldn’t find anything. And it was as though we never existed. Then in 2001, I heard a radio show, where this guy said, “At first America had trouble with people with AIDS, and then they came around,” and I was like no, actually thousands of people fought until the day they died and forced this country to change.

A re-historicization of ACT UP started to take place that was sort of based on the John Wayne, heroic-white-male individual model, where Larry Kramer was suddenly the leader of ACT UP. And I’ll just say for the record that I interviewed 188 people and nobody from ACT UP thinks Larry Kramer was the leader of ACT UP. It’s a media construction. Change happens because of collectivities and communities and coalitions.

I was struck that one of the first lengthy chapters in the book is about Puerto Ricans in ACT UP, because there is this idea that ACT UP was a group of white men. 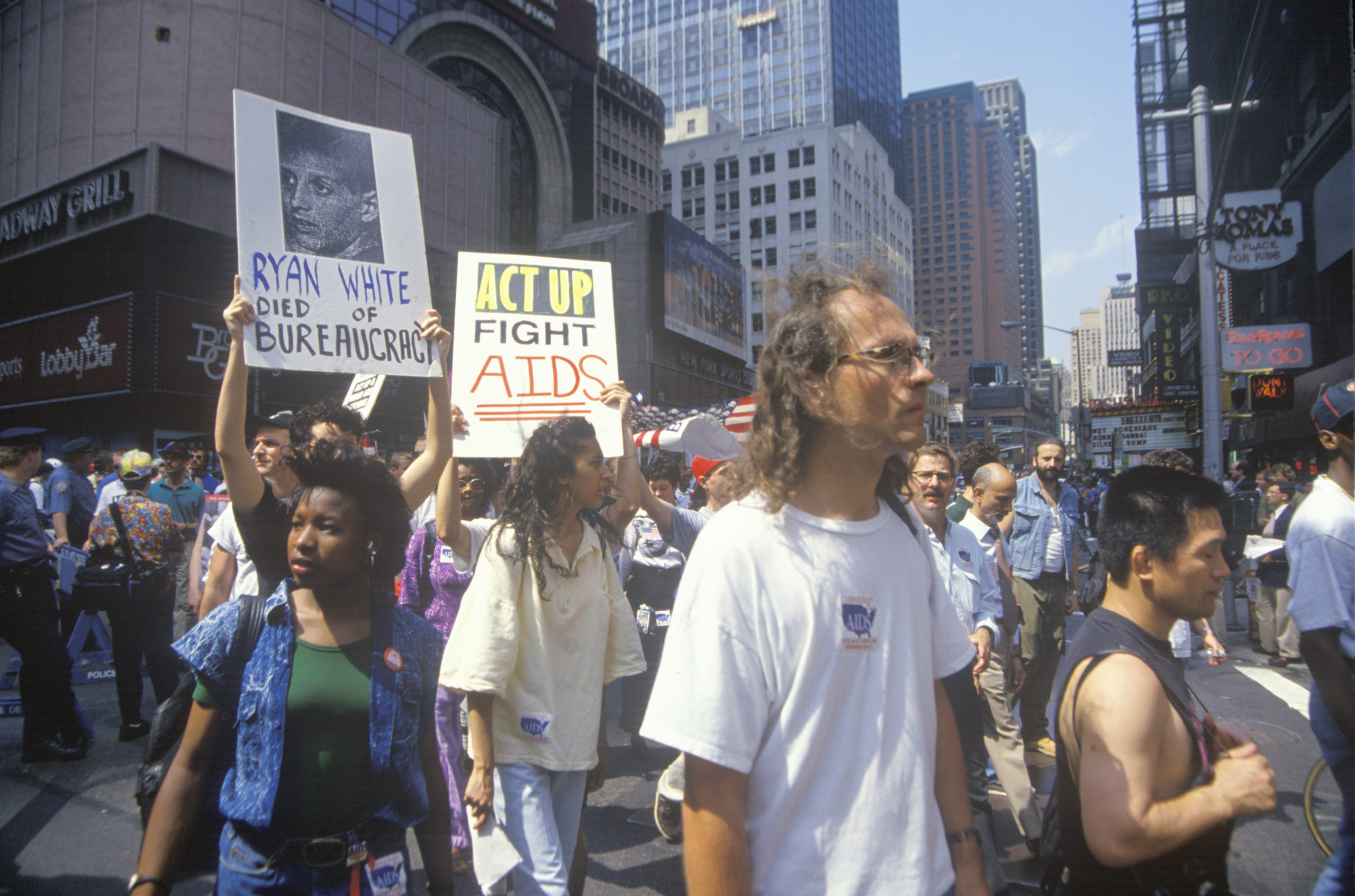 ACT UP was a predominantly white male organization, but it was not an exclusively white male organization, and there’s a big difference. The Monday night general meeting tended to be mostly white and male – there were quite a few white women there as well – but when people left that meeting, they went to work on projects that were coalitional. They were working on needle exchange, they were working with homeless people, they were working with women with HIV, with prisoners, with mothers, with Haitians. So their reach was way beyond the white gay male community. There were four committees in ACT UP that Latinos participated in that were specific to Latino experience, so it was a significant presence. It’s never been historicized in the context of white ACT UP, but there it is.

You outline the way things happened horizontally in ACT UP – they sort of happened all over the place.

Everyone thought that what they and their friends were doing was what ACT UP was doing; almost nobody had an organization-wide view. And that’s because people were very busy, but also because it was not a consensus-based organization. You didn’t have to have an agreement to do things. If you were willing to do direct action to end the AIDS crisis, you could basically do it. You wouldn’t try to stop somebody else from doing their thing, you would take your like-minded people and you would go organize the thing that you wanted to do. Because of that radical democracy structure, so many things were going on at the same time.

Like, the Asian Pacific Islander caucus – which is something that I write about that I don’t think has been included in the whitening history of ACT UP – were going to Asian gay bars and doing safe sex information using lucky red money packets from Chinese New Year to hand out condoms. And then there were people who were working with prisoners; there was a lot of activity with prisoner activists for incarcerated people with HIV. These two things are not related to each other, but they were happening at the same time. And that’s why ACT UP succeeded, because it made it possible for people to respond, from where they were at, instead of trying to force people into a homogeneity that never works. And it’s a really good lesson about Big Tent politics. 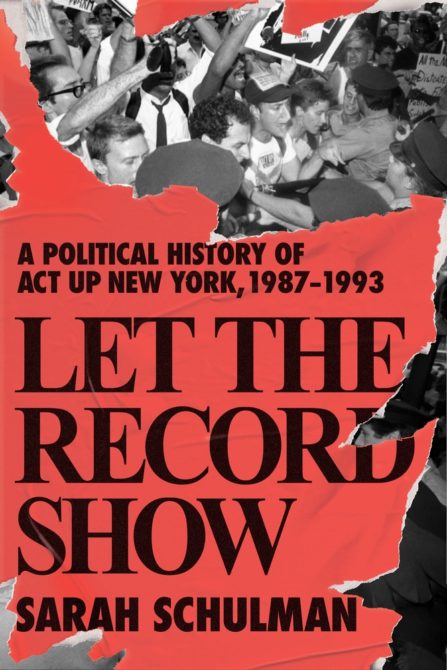 I was one of those kids who heard Larry Kramer speak when I was 21 years old. He did one of his rabble-rousing speeches saying, “This half of the room, you’re all going to be dead in 10 years, and what are you going to do about it?” And the solution that he offered, in the spring of 1987, was to join ACT UP, and so I did. Do you think Larry had a role in ACT UP beyond being that kind of motivator? [Kramer died in May 2020 at the age of 84.]

Larry was like a bad father. You know, if you didn’t worship him, he would withhold and he would punish you and embarrass you. But then he would come back and love you. Socially, Larry was a rich man with a lot of access, who yelled [at people in power], and most men like him did not do that. And that made him special. Like Peter Staley – I mean, how many stockbrokers from JP Morgan joined ACT UP? One. These guys came from a lot of privilege, and they felt in sense superior for it on some level, but they were exceptions. And what they did was really important. If more people with power had done what they did, we would have probably gotten where we wanted to go faster.

In 1988, I was part of the committee in charge of ACT UP’s presence at the Pride parade. That was the year that we made big signs that had the faces of our enemies, with their quotations, and the word GUILTY stamped above. Anthony Fauci [at the National Institutes of Health] was one of them.

That’s right. Anthony Fauci has been reborn as the hero of AIDS. Even Rachel Maddow said that recently, but it’s not true. In the book, I show three times that innovative activists told about going to Fauci with ideas about women, drug users, or parallel track [for faster drug access] and he rejected their ideas and had to be forced into them.

K.M. Soehnlein is the author of The World of Normal Boys and the forthcoming Army of Lovers, a novel about ACT UP. Read the transcript of his interview with Sarah Schulman.