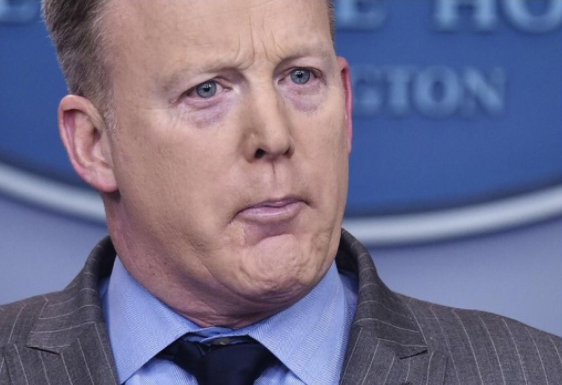 In case you haven’t heard, Sean Spicer really stepped in it (again) this week when he made not one, not two, but a series of embarrassing gaffes about the Holocaust.

To make a long story short, while speaking on Tuesday about the recent chemical attack in Syria ordered by President Bashar al-Assad (or who Spicer sometimes refers to as “Ashad al-Bashar”), the White House press secretary said that even Adolf Hitler never stooped to such a low level, telling media:

We didn’t use chemical weapons in World War II. You know? You had a, you know, someone as despicable as Hitler who didn’t even sink to using chemical weapons. So you have to, if you’re Russia, ask yourself: Is this a country that you, and a regime, that you want to align yourself with? You have previously signed onto international agreements, rightfully acknowledging that the use of chemical weapons should be out of bounds by every country.

But it didn’t stop there. After several people pointed out that, actually, Hitler did, in fact, use chemical weapons when he killed millions of people in gas chambers, Spicer was asked to clarify. And that’s when he went off on some bizarre tangent about “Holocaust centers”:

There was not in the — He [Hitler] brought them into the Holocaust centers, I understand that. What I am saying in the way that Assad used them, where he went into towns, dropped them down to innocent, into the middle of towns, it was brought — So the use of it. And I appreciate the clarification there. That was not the intent.

Oh, and did we mention all this happened on Passover?

Spicer later went on to issue not one, not two, but three poorly written responses to his truly embarrassing gaffe before sitting down with MSNBC’s Greta Van Susteren to say he “screwed up.”

“I’ve let the president down,” Spicer said, before adding, “It’s painful to myself to know I did something like that.”

Now, let’s take a look at the Internet’s response…

First there were the tweets…

PEPSI: We made the biggest PR blunder this year.

SEAN SPICER: Sit down, shut up and learn.

Holocaust Remembrance Day will be held on April 11, the day when Sean Spicer remembered there was a Holocaust. #TrumpandthePress

So Pepsi, United Airlines, and Sean Spicer walk into a bar…

Sean Spicer to be the new spokesperson for United Airlines. #Sean_Spicer #UnitedAirlines

Then there were the memes…

Was this guy home schooled in Germany?

Holocaust Center: It's the #NeoNazi #altright's (ahem, the entire #republicanparty's) way to minimize & deny the #Holocaust… He didn't just #fuckup, the term is all over #Breitbart & #Infowars. If you are a Republican, you are complicit. You are a collaborator! #holocaustcenter #holocaustcenters #holocaustmemes #nazism #nazi #nazis #naziwhitehouse #naziwhitetrash #nazitrump #seanspicer #donaldtrumpmemes #donaldtrump #trump #trumpmemes #seanspicersays #seanspicerfacts #spicer #gop #republicans #republican #passover #passover2017

Related: And with one simple Sean Spicer meme, the Internet bows with respect