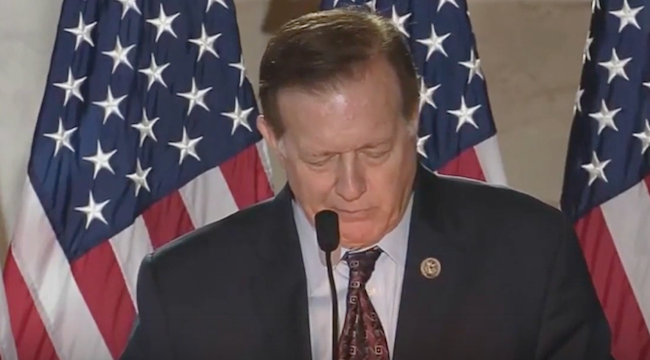 And they call us drama queens.

Wednesday night arrived with a surplus of feelings in the form of Republican Congressman Randy Weber, who couldn’t contain himself while asking God to forgive America for legalizing gay marriage.

As he begged and prayed, he openly wept in front of God and everybody.

Related: The GOP Congressman In The Steamy Aaron Schock FanFic Seems To Follow It Pretty Closely

According to Right Wing Watch, Weber apparently did a sort of freestyle mashup of “The Lord’s Prayer” a la Siouxsie and the Banshees, deciding to just have fun with it: “thy kingdom come, thy will be done on Earth in the halls of Congress.”

As some shapeless, bog-like frumps in the audience choked up at his stirring piece of performance art, Weber, goosed by the crowd, decided to just totally go for it and be that person.

Here’s an animated GIF demonstrating how moved the crowd was:

Feel free to add these GIFs to your own emails and comments.

Here’s why everyone was so overwhelmed with feeling:

“We have endeavored to try and kick your word out of public schools,” Weber chimed.

Father, we have trampled on your holy institution of holy matrimony and tried to rewrite what it is and we’ve called it an alternate lifestyle. Father, oh Father, please forgive us.

Lord, we have gone to killing the most innocent amongst.

Your servant Moses warned in Deuteronomy 19 for us to choose life so that we and all our descendants might live. Father, we’re killing our descendants and we’re calling it a choice. Oh, God in heaven, forgive us, please.”

Okay, but why you gotta bring the drug-sniffing dogs into this?

Watch the bizarreness below: