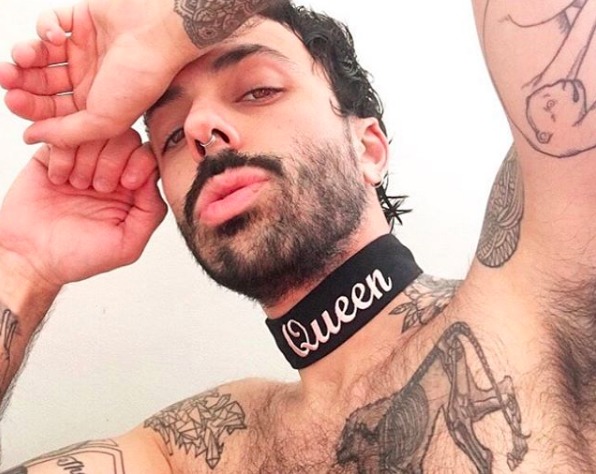 Sohail Akhavein a hairy, tatted-up, 31-year-old who loves posting thirsty pictures of himself to Instagram:

“The clothing you wear to work out is just as important as bringing water with you. With many functions, it’s vital to choose the right outfit for the activity you’re performing & the conditions you’ll be performing it in. It also communicates your athletic message.” ????

?where do gay gorillas prefer to spend their money on haircuts? vidal baboon?

He recently attended a community luncheon in his hometown of Minneapolis.

Before the luncheon, a person who Akhavein describes as a “casual nemesis” asked him to please “Tone it down so the focus can be on the community and not your body.”

The request came after Akhavein suffered a “semi-subtle” nip slip in low-buttoned blouse stolen from his mom’s closet to a previous community gathering.

“Ever since I attended a community progressive dinner party and served an array of Lunchables on a silver platter and Capri Suns I filled with white wine,” he tells Gay Star News.

When Akhavein told his dad about what the nemesis said, his pops responded: “Buy yourself the loudest suit your big gay heart desires” and gave him a wad of cash.

Akhavein took to Twitter to explain what happened next:

I’m an employed 31 year-old man w/a father who just deposited money in my account to “buy yourself the loudest suit your big gay heart desires” after I told him I’m going to a formal community luncheon tomorrow & was asked to “dress subtlety this time,” & my big gay ? is surging

He followed that up with another tweet, saying he had located something in his closet to wear (his mom’s old blue leopard suit) and that he would instead be donating the cash his father gave him to a local LGBTQ charity:

Update: I’ll be making a donation in my dad’s name to a local LGBT mental health org w/the funds he gifted me & wore something I already had in my closet that fit the brief.

?Much like my queerness, I don’t take the love & acceptance I’m gifted for granted in any capacity? pic.twitter.com/fdEV7wVCgU

Akhavein tells Gay Star News that the luncheon went “swimmingly”, adding, “There was a neighbor who told me she wished I would have informed her of my suiting option before the meeting before because she would have worn the same suit jacket.”

Related: You won’t believe what happened after this mom sent her gay son’s “smut photos” to her carpenter

Adult star Matthew Camp has something eye-popping to show you

haunted by the past
10